What's My Line? at 25 was a television special that chronicled the life, times and excellent moments of the show.

This special primarily consisted of clips from the original 1950-1967 CBS primetime run, just prior to the demise of the 1968 syndicated revival in September of 1975.

At the time, this special was presented as part of ABC's Wide World of Entertainment late night package that aired weeknights at 11:30 PM ET which also included concert specials with Dick Clark, reruns of The Movie of the Week and The Dick Cavett Show.
The set consisted of three chairs (for which you can see in the Photos section of the article) where Mark Goodson, Arlene Francis and John Daly sat at a coffee table on a dais covered with red carpeting by a blue cyclorama along with its logo hanging in front of it.
This special exists at The Museum of Radio & Television in New York.
After being off the air for more that 39 years, this special was re-broadcasted at midnight on GSN (Game Show Network) as of December 24, 2014 and was also aired on Buzzr as part of their 3rd Annual "Lost & Found" week on September 29, 2018. 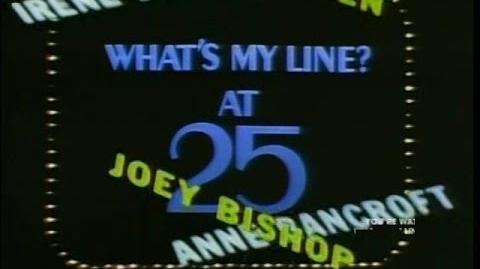