What's My Line? was a radio show. 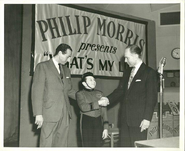