After two rounds of What's My Line? were played, a third round was played but a little differently. For this round featured the appearance of the "Mystery Guest". This was where the panelists were blindfolded so they couldn't see the guest. The mystery guest entered and signed in as usual, and that's where the game began. As usual the panel asked yes or no questions, this time to try and guess the name of the mystery challenger. What makes this round more different is that this time each panelist can only ask one question per turn hence the rule "one question at a time", and they had two to three minutes to identify the guest. While all this was going on, the mystery guest disguised his/her voice in a variety of ways.

Some mystery guests wouldn't be famous from the entertainment field, but from other walks of life; when that happens, those guests would play in the main rounds; instead of writing their names, they would write down a big "X" referring to them as Mr. or Ms. "X".

Originally from November 2004 to July 2006, Jim Newman and J. Keith van Straaten (former host of Comedy Central's Beat the Geeks) produced one-hour live stage versions of the show at the ACME Comedy Theatre in Los Angeles, CA, called What's My Line? - Live On Stage. The Los Angeles version of the live show went on hiatus when van Straaten relocated to New York, then resumed in June 2007. 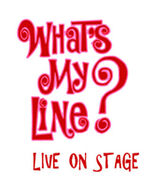 The production debuted in New York at the Barrow Street Theatre on March 24, 2008 for an announced run of six shows. The show is now an authorized production of FremantleMedia (the owners of What's My Line?) As of April 12, 2008; the New York mystery guests have been:

including veterans from the original TV version:

In Los Angeles, panelists have included:

Mystery guests from the L.A. version have included:

Panelists and guests who have appeared in the original television and on-the-stage versions include:

Usually, when such a veteran appears, there is a pristine-quality DVD screening of the original kinescope on a plasma screen. Non-celebrities include the lifelong Los Angeles-area resident who challenged the panel with her line, afterwards reminiscing how 43 years earlier she had traveled to New York, where Arlene Francis identified her as a meter maid. A clip of the kinescope was played.

In addition, the show had featured relatives of the original cast:

In addition, It also included a segment in which Vinton Cerf's son Bennett (named after the panelists) appeared as a guest.

Only about ten episodes exist from the first two years of the series, including the first three broadcasts. The rest of the series exists in its entirety and has been aired on GSN and Buzzr at various times in the past.