Two for the Money was a primetime game show where contestants give a series of answers that fit into a category as fast as they can to win money.

In this four-year-old nighttime game show, teams of two contestants (couples) played three rounds of categories. On each round at the sound of the bell in each category and while alternating turns, the team had 15 seconds to name as many items that fit into the category as they can, with one mistake (which was either repeating an answer or giving a wrong answer) ending the round. The first round was worth $5.00 an answer, and the next two rounds had answers be worth the total dollar amount scored in the previous round.

Two for the Money was originally designed for Fred Allen, who had filmed the pilot on June 05, 1952. Due to illness, he was unable to do the show when it became a series. He did get a chance to host the show though, when he filled-in for Herb Shriner on the January 9, 1954 episode.

Main Article: Two for the Money/International

See Also: Two for the Money/Merchandise 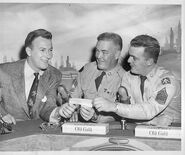 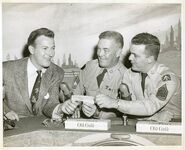 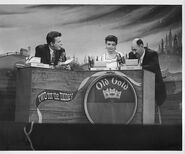 Two for the Money (Radio)

Retrieved from "https://markgoodson.fandom.com/wiki/Two_for_the_Money?oldid=46377"
Community content is available under CC-BY-SA unless otherwise noted.