Trivia Trap was a game show where two teams, one with people under the age of 30 as Juniors and another above the age of 30 being the Seniors, have to find the right answer in a group of four possible answers to a question by removing all wrong answers.

The pilot had basically the same format as the first one in the series, but with several differences in gameplay. The most obvious differences were that the set was different, and that nobody wore sweaters whatsoever. Also, the Seniors played green instead of red; the Juniors' team color remained the same.

The Trivia Trap Round[]

The team in control still cut out wrong answers, but they did that optionally (this was classified as "playing it safe"). The generic purpose for the team was to simply choose the right answer (classified as "going for it"). In the event that the first two players played it safe and successfully found the wrong answers, the third player was forced to go for it and find the right answer. Choosing incorrect answers was still worth $50, and finding the correct answer was worth double or $100, for a grand total of $200 each turn. If at anytime any player on the controlling team made a mistake, the money depending on the criteria went to the opposing team. Each team had three turns; as in the series each team can earn up to $600.

The Trivia Ladder round was played mostly the same, except the following differences:

Two teams of three players played. One team was the Juniors, who wore the blue sweaters, and all the players were under 30 years of age; the other team was the Seniors, who wore the red sweaters, and who were over the age 30. Eubanks always notes that when you have hit your 30th birthday, you're automatically a senior. These two teams each played games of trivia (whose formats changed as the run went on) to reach a goal of $1,000.

Teams were shown two rows of monitors, with four answers in each row. The team in control chose one of the two rows, and then a question was asked pertaining to those answers. The team members took turns selecting an answer that they thought was wrong. Upon choosing an answer, a question mark appeared to let the viewers know. When a wrong answer was picked, a bullseye appeared; but when the correct answer was chosen, a jaws/teeth/earthquake-like graphic appeared to indicate that the player who picked it ran into the “Trivia Trap”. Play continued until all three wrong answers were eliminated, or the correct answer was chosen. The team received $50 for each wrong answer, but for eliminating all three, the value was $300. After one team played their question, a new row replaced the one used, and the second team chose which row to play. Each team played two questions for a possible total of $600.

Round One (Fact or Fiction?)[]

Effective December 17, 1984, the front game was changed. The first round was called “Fact or Fiction?” The champions were given the choice of two colored envelopes (Red or Black). Then Bob would ask a True/False question to each player, each worth $25. The other team would then play the other envelope. For the second part, the challengers had the choice of envelopes. Each team played two envelopes.

Round Two (The Trivia Trap Round)[]

In the second round, the team in the lead (or the champions, in case of a tie) played first and had a choice of two categories. After the category was chosen, four answers were shown. One player would answer, and then the other two had a choice to agree or disagree with that answer. Whether the players agreed or disagreed determined the value of a correct answer. If all of them agreed and the answer was right, they would win $200. If one agreed and it was correct, they won won $100. If everybody disagreed it would be worth $50. If they disagreed correctly, they would then be able to choose the correct answer, in the same way explained above. As before, the other player could disagree to try to save the team. After the question, the other team played the other category. Again, each team played two questions.

This second format retained the original Trivia Race format in round two, played after the Trivia Trap round.

In the final round, known as the $1,000 Trivia Race, control began with the team in the lead; in case of a tie, control began with the champions or the winners of a coin toss. Three categories were shown, and the team in control of the board chose which category they wanted. After a category was used once, a new one replaced it. Bob would read the question, and one at a time, the players would answer. If one of them answered correctly, the team kept control and chose another category. $100 was awarded for each correct answer; starting in the show's second week, $200 was awarded for each correct answer after the tenth question (15th question from February 4 - February 6, 1985). If none of the players answered correctly, the other team would get control. The first team to reach the goal of $1,000 won the game and went on to play for a possible $10,000.

Both formats of the show used the same bonus round, called the $10,000 Pot of Gold Trivia Ladder. This time, the players on the winning team played for themselves. The three players played in order by their success in the Trivia Race. A row of monitors rose to the first level of the Trivia Ladder. Four answers were shown to the best player. That player could then play that question or pass it to the next player, who, in turn, could either play that question or pass it to the last player. If a player answered correctly, he or she won $1,000. If the player answered incorrectly, that player was eliminated, but did return to play the next day.

After the first question was asked, the row of monitors rose to the next level of the ladder, and four new answers were shown to the better-ranked player of those remaining. As before, that player could either answer or pass to the last player. For the third question, the remaining player had to answer.

Any player who answered a question correctly on a lower rung of the ladder played for $10,000. Four answers were shown as before, and a question was asked. The players locked in the answer they believed was correct on a hidden panel in their podium. (If only one player was playing for the $10,000, that player simply said which answer he or she believed was correct.) Any player who correctly answered the question won $10,000. If more than one player gave the correct answer on the final question, those players shared the $10,000. Any team that played The Trivia Ladder five times would retire undefeated; the theoretical total would at least $70,000, with the highest total awarded being $65,500.

This is the first of two Mark Goodson shows hosted by Bob Eubanks, his second show was the 1986-89 version of Card Sharks.
This was the first game show that both Bob Eubanks and Gene Wood worked together on. The second was Card Sharks in 1986 and their third and final game show project was a special on Game Show Network (GSN) called The Newlywed Game: A Silver Anniversary of Love and Laughter (although Wood was never credited at the end) in 1998.
This is the last Goodson show that was an original idea and not a revival of a previous format. (barring lottery game shows)
During the first format after the first round, host Bob used the unused question with the unused row of answers as a home viewer question. The answer to that question was revealed after the show returned from a commercial break.
The sound used to reveal the four choices to a question was later recycled as the "Fast Money" answer reveal sound on Family Feud (Combs) and has been carried over to other versions of the franchise since the 1988 revival also could be heard in the 1989 version of Now You See It.
The sound used when a wrong answer is eliminated & when the correct home viewer answer was revealed was later recycled into Classic Concentration when a panel flipped. It is also used in numerous Saturday Night Live (SNL) game show skits as a ring-in sound.
The "trap" sound was recycled into Illinois Instant Riches and Illinois' Luckiest when someone wipes out, as well as The Price is Right for stepping to a wrong number in the Pathfinder pricing game and on NY Wired on occasion. In addition, the sound was also used for the 1986 pilot On a Roll when a player guessed one of the three-lined puzzles incorrectly.
The electronic beeps and sirens were also used (similar to The Price is Right clangs and whoops) when any players who correctly answered the final question, won the entire $10,000 grand prize or if more than one player who gave the correct answer on the final question, these players equally shared the $10,000 grand prize.
On the following Monday, the show was later replaced by another short-lived Heatter-Quigley produced game show All Star Blitz.
In 2015, this show was one of the six candidates for Buzzr's "Pick & Play Sunday" night lineup along with: Sale of the Century (Perry), Now You See It (Narz), Double Dare (Trebek), Beat the Clock (Hall) and Wordplay. However, it failed to generate enough votes from viewers to make it on to the schedule. However, it made it on the schedule two years later knocking out Double Dare.

This series exists in its entirety, and has aired on GSN and Buzzr in the past. 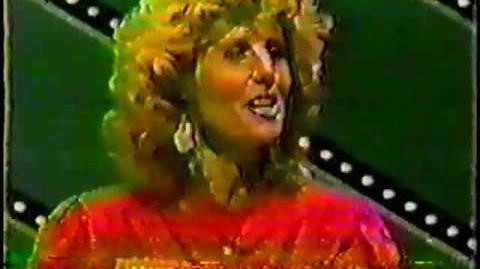 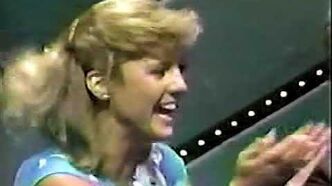 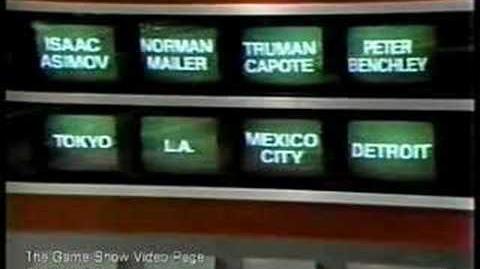 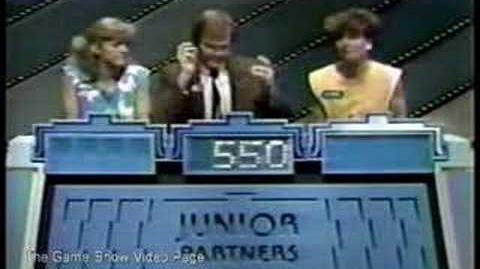 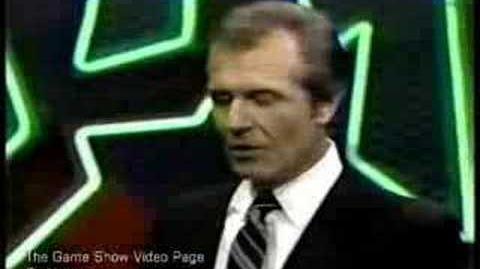 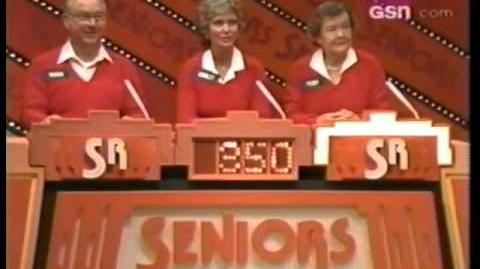 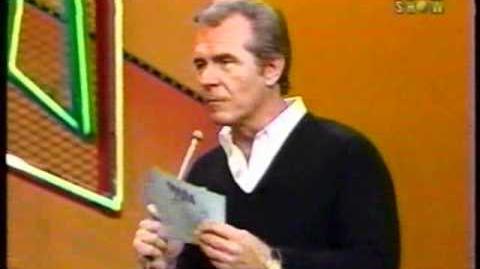 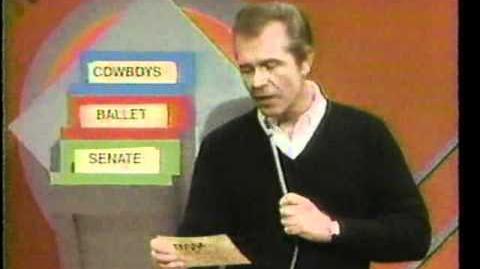 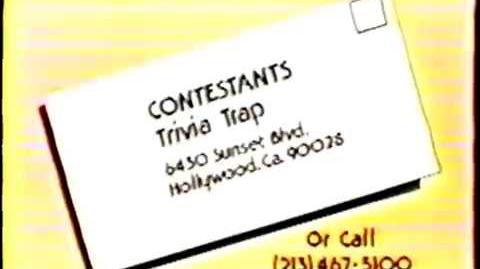 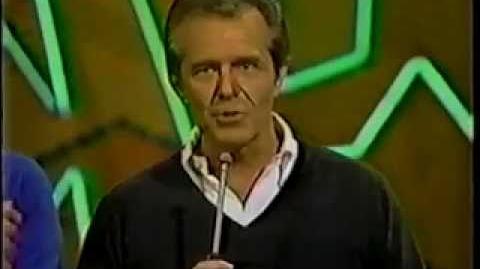