Mark Goodson Wiki
Register
Don't have an account?
Sign In
Advertisement
in: To Tell the Truth, NBC Daytime, 1990 Premiere, 1991 Ending

The 90's edition of To Tell the Truth was still played the same way as its predecessors, but with some changes in terms of the prize money split between each team of challengers. Now, each incorrect vote from the celebrity panel was worth $500, with a guarantee of $1,000 for one or two incorrect votes; if there were three incorrect votes from the panel, then the team split $1,500 between them ($500 per person), and if the panel was completely fooled, then the team split $3,000 between them ($1,000 per person).

After the second game of the day, a new version of the "One on One" game from the 1980 edition was played. This time, a member of the studio audience tried to determine which one of two short stories a new solo challenger told about themselves was true. Each celebrity got to ask the challenger one question for each story, and if the audience member picked out the right story, he/she won $500; otherwise, the challenger won $1,000.

On occasion, celebrities and other lesser-known individuals whose faces were not well known to the public would attempt to fool the audience during this part of the game. A prime example of this occurred on the show's Christmas Day episode when Hank Ketchum, the creator of Dennis the Menace, attempted to fool an audience member by also claiming that he was Johnny Marks, the writer of Rudolph the Red-Nosed Reindeer, but was unsuccessful in doing so (Ketchum was presented as "Mr. X" on this episode).

This was the first series of To Tell the Truth broadcast on NBC, and the first series to be taped on the West Coast (NBC Studios in Burbank, CA); its predecessors were all taped in New York, NY.
The show's theme song was an orchestral remix of the 1969–78 theme (sans the lyrics), and the show used same the block-letter logo used from 1973 to 1978.
For two episodes in February 1991 (February 18-19), Mark Goodson filled in for Alex Trebek when his wife Jean went into labor with their first child.
This was Burton Richardson's first time working as the announcer on To Tell the Truth; he later became the announcer of the syndicated 2000-02 edition hosted by John O'Hurley. Four years later, both O'Hurley and Richardson worked together as host & announcer on Family Feud respectively from 2006 to 2010.
Although he had a very short-lived run for this incarnation in general, Lynn Swann was the first African-American host of To Tell the Truth; the second is Anthony Anderson since 2016.
At the time that Alex Trebek was selected to be host of To Tell the Truth, he was hosting two other game shows at the same time: Jeopardy! and Classic Concentration. To Tell the Truth was the third (and last) Mark Goodson game show he hosted (the first was CBS's Double Dare, not to be confused with the Nickelodeon kids game show of the same name).

See Also: To Tell the Truth (1990)/Episode Guide
This series exists in its entirety, and has aired on both GSN & Buzzr in the past. 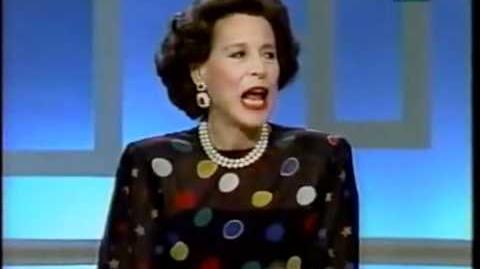