Mark Goodson Wiki
Register
Don't have an account?
Sign In
Advertisement
in: To Tell the Truth, Game Shows N-Z, Syndicated,
and 2 more

This is chronicling the 1980 version of To Tell the Truth.

To start, three contestants all of whom claim to be the same person introduced themselves (most of the time the contestants are of the same sex, on rare occasions there would be a mixture of both sexes), then the host read the sworn affidavit of the real person. After the affidavit was read and when the challengers went over to their desk, the panelists one by one asked a series of questions to the challengers based on the affidavit in some way for an unmentioned amount of time. The impostors were allowed to lie, but the real person was game bound to tell the truth (hence the name of the show). Once one panelist's time was up, another panelist started questioning. Once the entire panel's time was up, they started to vote for whoever was the real person. Each panelist showed his/her vote, and regardless of whoever they voted for, the appropriate panelist's vote for the appropriate contestant was signified by an "X". Once all the votes were cast, the real person then revealed himself/herself by standing up by virtue of the host saying "Will the real (insert person's name) please stand up?". After the real person revealed himself/herself, the impostors told everyone their real names & occupations; then there was a brief chat (sometimes a stunt) to the real person. For each incorrect vote, the team of challengers won $100 and if the panel was stumped, the challengers win a total $500.

Sometimes, a panelist would recognize or actually know one of the challengers, not necessarily the real person. If and when that happened, the panelist can disqualify himself/herself (later renamed recusal) causing an automatic wrong vote and giving the challengers money for that vote.

After two regular games of To Tell the Truth were played, one special game was played called "One on One".

Robin Ward went on to host the Canadian CTV family game show Guess What From 1983 until 1987.
The One on One segment was also used in the short-lived 90s version on NBC daytime and the 2016 version as Before You Go. 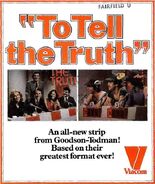 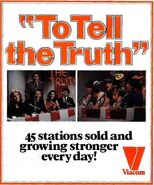 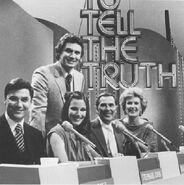 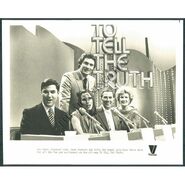 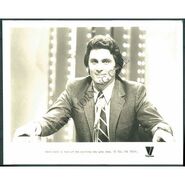 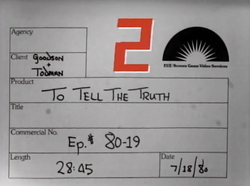 See Also: To Tell the Truth (1980)/Episode Guide
This series exists in its entirety, and has aired on GSN and Buzzr in the past.