The Name's the Same

The Name's the Same was a game show where people with the name of a famous person are questioned by a celebrity panel.

Each standard round featured a contestant who had a "famous name": the contestant's full name was the same as either an actual person ("Jane Russell," "Abraham Lincoln," "Napoleon Bonaparte"), a place ("Virginia Beach," "Monte Carlo"), a thing ("A. Lap," "A. Table," "Ruby Lips"), or an action ("I. Draw", "Will Kiss"). The contestant was introduced and referred to throughout the game as "Mr. X" (or "Mrs./Miss/Master X"). A small curtain was opened to the audience, showing a placard with the contestant's name, along with a drawing depicting the namesake; famous people were often caricatured.

The panelists were allocated 10 questions each, with the number remaining denoted in running tally on the wall behind them. The questions had to be "yes or no" questions, and were posed to the contestant as if they were the person, place, or thing their name represented with the contestant answering as their namesake. The panel could pass to save some of their questions for later on in the game. Any member of the panel who failed to identify the contestant's name wrote the contestant a check for $25, meaning each contestant won either $50 if their name was guessed by a panelist, or $75 if it was not. When a fourth panelist was added in early 1954, the check amounts were decreased to $20 per panelist, making the prizes $60 for a correct guess and $80 if the panel was stumped.

Many of the contestants' names lent themselves to comedy. Robert Q. Lewis would always call on Carl Reiner first when the mystery name was a thing: Reiner's innocent questions always took on funny meanings, followed by Joan Alexander straying even farther away, to the studio audience's delight. For "A. Harem," Reiner asked, "Is this thing used for recreational purposes?" and Alexander pursued this: "Do fat men use this to reduce their weight?" Lewis would enjoy these detours as much as the audience. It was then left to Bill Stern, a veteran reporter, to zero in on the actual name with serious, shrewd questioning.

Sometimes a contestant's celebrity namesake was brought out at the end of the round to surprise the contestant; other times, a celebrity was the guest without pretext. The celebrity then played a special round called "I'd Like To Be..." in which the panel tried to guess, in the same fashion as with civilians, who the celebrity would like to be if they could be anyone else. In late 1953, "I'd Like To Be..." was replaced with "Secret Wish", in which the panel attempted to guess something that the guest would secretly like to do or have happen (for example, Kirk Douglas wished to coach the Vassar lacrosse team, and Van Johnson wanted Marilyn Monroe to sit on his lap). The celebrity's winnings ($50/$75, later $60/$80) went to his or her favorite charity.

A few times near the end of the run, host Clifton Fadiman would welcome the panel, then reveal the episode's guest to the studio and home audience. The curtain would pull back with the guest standing behind it in place of the usual caricature. A typical episode contained four rounds - two standard rounds, the celebrity round, and then a final standard round; some episodes would feature one less or one more standard round. At the end of each episode, each panelist would tell how much money they "lost" followed by a good-night.

The theme song used for most of the show's run was "Shooting Star" by Sidney Torch. However during the final season the theme song was "Meet Me in Saint Louis, Louis" by Kerry Mills.

The show was sponsored by Swanson TV dinners and Johnson Wax for the majority of its run. It was also sponsored by the Bendix home appliance division of Avco, Clorets, and Chicken of the Sea tuna. The final sponsor was Ralston Purina.

Main Article: The Name's the Same/International 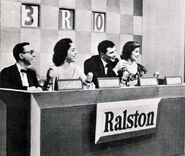 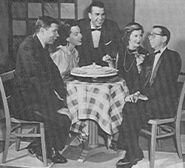 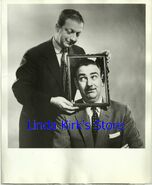 Many episodes exist and have been aired by GSN and Buzzr in the past.