The Match Game (stylized as The MATCH GamE) is a game of judgment before the 1970s classic comedy version we all know & love.

Two teams of three players (consisting of two civilian contestants & one celebrity team captain), competed in this early version which is a game of judgment. Host Rayburn read a question in which the possibilities are endless, plus they weren't restricted to fill-in-the-blank types. All six team members write down their answers on their cards and raised their hands to indicate that they're finished. Each player revealed their answers one player at a time and their objective is to match their teammates. For each match the team's answer, they scored 25 points (10 pts. early in the run from New Year's Eve 1962 to February 1, 1963.) If no match isn't created whatsoever, Gene reads the question again and the players rewrite their answers (they can be the same or can be different). The first team to reach 100 points (this make 4 Matches and before that there's 10 Matches) wins the game, collects $100 and go on to play the Audience Match.

In the Audience Match, the winning team attempted to match members of the previous studio audience. Host Rayburn asked 3 Secret Survey Questions and on each question, the team gives their own individual verbal answers to what they think is the number one answer "THE BEST ANSWER" (they can agree or disagree on each other's answers). The contestants divide $50 for each player on the team that gives the #1 answer (the best answer) for a maximum of $150, so with three questions, they can win up to $450. Beginning with the January 2, 1964 broadcast, The 3 Secret Survey Questions were polled with 100 people or less.

On February 27-March 3, 1967 the show introduced a "The Telephone MATCH" game powered by AT&T (The American Telephone and Telegraph Bell System Company-AT&T Bell System in 1967-1969,) in which a home viewer and a studio audience member attempted to match a simple fill-in-the-blank question similar to the 1970s' "Head-To-Head Match". A successful match win the share of the cash jackpot which started at $500 and increased by $100 per day (from February 27 to April 28, 1967, It's placed $50 per single day) until it's a exact match. The contestants received a consolation prize if they didn't match.

The pilot was exactly the same as the series except that the scoring format was different. In the main game, each match was worth 10 points with 50 needed to win. The contestants on the winning team split $100. Each match made in the Audience Match was worth $25 for maximum of $75 on each question. Four questions were asked, so the maximum total was $300.

The Original & 1st Theme song is “A Swingin’ Safari” and it's performed by Bert Kaempfert (1962-1967.) The second theme song shares it's title with the show called "The MATCH GamE" and It's written and performed by Charles "Charlie" Fox & The Score Production Band (1967-1969.)
15 Years later, the "Telephone Match" segment would be carried over in 1984 for The Match Game-Hollywood Squares Hour during "Sweeps" period in February and May.
This was the first version to be taped in New York City, the second version was for ABC (simply known as Match Game) hosted by Alec Baldwin since 2016. 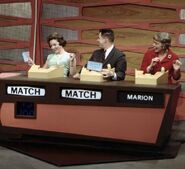 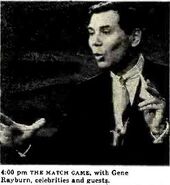 Only 12 episodes are known to survive: the pilot and ten kinescope recordings, all of which are archived at the Paley Center for Media. Nine of these are black-and-white kinescopes and one is a color episode (from 1969, and presumably also a kinescope). Also surviving is an audio recording of the September 10, 1965 episode.