Miller was born in Washington D.C. and grew up on Willow Street in Lockport, New York. She is the daughter of Stephanie and former U.S. Representative William E. Miller, who was Barry Goldwater's running mate in the 1964 presidential election and a Chairman of the Republican National Committee (RNC). After completing her secondary education in private Catholic schools, she attended the University of Southern California, earning a degree in Theatre.

After graduation, Miller performed stand-up comedy at the Laugh Factory, the legendary comedy club. Later in her career, she performed at many comedy clubs around New York and Los Angeles.

Early in her career, Miller had several small acting jobs. Such as appearing as a Nun in the 1984 movie Shattered Vows and as a Nurse in the 1981 horror film Happy Birthday to Me. After gaining prominence as a radio and TV host, she had roles where she essentially played herself, as in the movie View From the Top, a brief appearance as a nurse on General Hospital and she was in an episode of the TV series Diagnosis: Murder. Her most significant acting role was in the 1997 comedy film Just Write.

Miller returned to Lockport for an on-air job at radio station WLVL. In 1985, she went to WCMF in Rochester, New York to work as "Sister Sleaze" on the Brother Wease Show. She progressed to larger market as morning co-host at hit music radio station WCKG in Chicago and WQHT in New York. In 1993, Miller was hired by talk station KFI in Los Angeles, where she achieved high ratings with her own weeknight radio show.

In the autumn of 1995, Miller became one of the few women to host her own late night talk show. The Stephanie Miller Show (syndicated by Buena Vista Television), the show was cancelled after 13 weeks on the air.

Miller returned to Los Angeles radio in 1997, first at KTZN and then at KABC. Later that year, she also began co-hosting the CNBC television show Equal Time, as a liberal counterpoint to conservative Bay Buchanan.

In 2000, the classic game show I've Got a Secret was revived on the Oxygen cable network with Miller as host. That following year, she began co-hosting Oxygen's weekday TV magazine show Pure Oxygen. She also served as a panelists on the short-lived PAX-TV game show Balderdash (Based on the board game of the same name) hosted by Miller's Friend Elayne Boosler.

Miller's radio show was briefly televised from 6 a.m. to 9 a.m. Eastern Time on MSNBC from April 30, 2007 to May 2, 2007. During this period, the show originated from MSNBC's studio in Secaucus, New Jersey, the studio and time slot formerly used by the now-cancelled Imus in the Morning. After the stint, she said that she was not interested in the position full-time.

In September 2004, The Stephanie Miller Show was launched by Democracy Radio and WYD Media Management. The live show is broadcast weekdays from 9 a.m. to noon Eastern Time in Los Angeles, San Francisco, Chicago and Seattle and on XM Satellite Radio's America Left channel 127.

Miller's program is widely popular; for example, she is ranker #2 in Los Angeles. She also stated that she beat the "Armstrong & Getty" radio programming in San Francisco in her first ratings book. The show's audience has grown substantially since its beginning and had 2.5 million weekly listeners as of March 2010.

Miller is often referred to on the show as 'Mama' (or 'Jiggles') by both listeners and her co-hosts. These numerous references can be heard in the free bits website or by purchasing a "Stephcast" subscription, whereby users can download all of her shows for a monthly or yearly fee. She, and her listeners, call her two co-hosts 'The Mooks'. Her co-hosts, Impressionist Jim Ward and producer Chris Lavoie, often share their own opinions and arguments. Miller often seems to jokingly call her 'Mooks', or refer to them as "Voice deity Jim Ward and Boy-Toy Lavoie". Associate producer Rebekah Taylor (referred to Miller as being surly) steps in to add some commentary early in the broadcast but is also utilized for her Ross Perot impression. Miller has special gusts co-host: Eddie McClurg for "Mondays with McClurg", Aisha Tyler for ""Tuesdays with Tyler", Hal Sparks on Wednesdays for "Hump Day with Hal" and John Fugelsang for "Fridays with Fugelsang".

She often shared personal details about her life, from something as simple as household appliances not working to much more intimate details about insomnia and even what she calls "Shy Pee Syndrome", which is actually "paruresis" (a type of phobia in which a person is unable to urinate in the real or imaginary presence of others, such as in a public restroom). She also covers a great deal of celebrity news/gossip and off-the-wall stories.

Sirius Satellite Radio, which had been running Miller during primetime hours (afternoon commute time) on their liberal "LEFT" channel 146, cancelled her show in 2007. However, on November 30, 2007, Miller announced that Sirius left will air one hour of her show at 8 PM eastern beginning on December 3, 2007. On August 2013, Sirius XM Left was renamed Sirius XM Progress, and began airing Miller's entire show from 9 am to noon Eastern time.

In late January 2008, her show on "Green 960" KKGN, San Francisco's Air America outlet, was cut from three hours to one. She had been on from 6am to 9am PST but was replaced from in the 7am to 9am "prime time-drive" slot with local talent. This decision has provoked controversy. However, as many listeners were upset by the decision. After only two weeks on the air in that time slot, Miller's show was reinstated o the full three hours due to the large volume of correspondence sent to Green 960 from its listeners.

In November 2009, it was announced on the air that the show was soon to "go bi" (meaning bicoastal). After an on hand remark by Miller on November 12, 2009, that she was having trouble packing up her house and move to New York elicited questions on her online blog, it was formerly announced that Miller would travel back and fourth between New York City and Los Angeles.

On March 5, 2012, Current TV announced that the show would be simulcast on the network's new morning block as Talking Liberally: The Stephanie Miller Show beginning March 26, 2012. Her final Current TV broadcast was on August 15, 2013, as the channel became Al Jazeera America on August 20, 2013. The show will move to Free Speech TV after a successful Indiegogo campaign by both Miller and Free Speech to raise the money needed to buy equipment and produce the TV side of the show.

In 2006, Miller had numerous appearances on several cable news shows, such as Larry King Live to represent the progressive political point of view.

From April 30, 2007 to May 2, 2007, Miller filled-in for Don Imus on MSNBC's 6AM-9AM ET time slot. Miller and her on-air staff received favorable reviews for their appearances. A fan petition was started to make the show the permanent replacement for the Imus MSNBC show. However, Joe Scarborough's show Morning Joe has now taken over this time slot.

More recently, Miller's Sexy Liberal Comedy Tour has toured the country to very high acclaim. Miller with regulars cast members: Hal Sparks, John Fugelsang and other special guests brings together three "liberal comedians" for an evening of liberal humor and content. Prior to this, A Volume 1 (CD or MP3) of the tour is available online.

Miller has never been married, although she has jokingly compiled a long list of "future husbands", most notably Keith Olbermann. However, On August 13, 2010, Miller announced on her radio show that she is now a lesbian and has credited country singer Chely Wright with helping her in coming out.

In October 2007, she shared with her audience that she had been ill with mercury poisoning and was down to dress size zero.

She often mentions her dogs on her radio show and currently lives with two Great Pyrenees, (Max & Fred). Oliver, (a Tibetan Mastiff/Great Pyrenees mix) which Miller rescued in the Spring of 2009, has new owners now due to a family crisis that had occurred and left Miler unable to train and care for him fully. She frequently had to travel from the West Coast to the East Coast, which left her little time to train Oliver. Her other Great Pyrenees, Puff died on April 23, 2009. Her best friend wrote a children's book inspired by Miller's St. Bernard, Chester; Chester died a few months before the book was released in mid-2006. Her Newfoundland, Poo Bear, lived for two years with bone cancer before dying on March 30, 2007. Prior to this, she devoted a portion of her April 2 show discussing his life and how sad her life would be now that he was gone. Miler has done promotional events for the animal welfare organization. 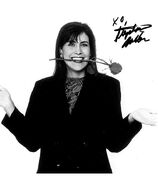 Retrieved from "https://markgoodson.fandom.com/wiki/Stephanie_Miller?oldid=47509"
Community content is available under CC-BY-SA unless otherwise noted.