Showoffs was the 1st ever Goodson-Todman game of charades.

Two teams (red and blue) of three players (consisting of two celebrities and one civilian contestant, with each member wearing a sweater of the corresponding team color) competed in a game of charades. Because the team colors were indistinguishable on black and white television sets (which were still somewhat common in 1975), the words "REDS" and "BLUES" were later placed on the front of each team member's sweater for the benefit of home viewers.

The original host was supposed to be Larry Blyden as he taped a pilot of May 24, 1975 for the show and Elaine Joyce, Ron Masak, Linda Kay Henning and Dick Gautier were the four guests. The format used in the pilot was the same as that used in the first half of the series' run, except that all three rounds were played in the manner described above (which meant that there was no three-word tiebreaker).

Despite its short run, Showoffs had two formats for its main game.

One team was isolated while two members of the other team acted out a series of words to their partner for sixty seconds. The actors could alternate in acting, and the guessing partner could pass on a word if he/she were stuck, but the team could do that only once per game. When time ran out, the isolated team returned to the stage, and acted out the same words as the first team. The team that guessed the most words in two minutes (60 seconds per team) won the round. The first team to win two rounds won the game. If the game ended in a tie, then a tie-breaker round was played in which both teams had 30 seconds to act out three words. The team doing that in the fastest time won.

About halfway into the run (possibly in September), the method to win the game had changed. Now to win the game, the team had to correctly convey and guess a set number of words or more (usually seven).

Extra rounds were played if the goal had not been reached by the end of a full round. The tie-breaker was cut to two words in 30 seconds.

In either case, the civilian contestant on the winning team won a $1,000 prize package plus a chance to play the bonus round.

This also had two formats in the series.

All four celebrities alternated turns acting out a series of words for the winning contestant to guess during the next 60 seconds, with each correct answer worth $1.

When time ran out, one celebrity chosen by the contestant had 30 seconds to act out three words. Each word added a zero to the winning player's round one winnings - guessing one word correctly was worth 10 times the money, two words 100 times, and all three 1,000 times the money earned in the first phase.

Around the point in which the front game changed, the bonus round was also revised. Now the winning contestant acted out a maximum of three words to one of his/her two celebrity partners. He/she acted out the first two words for 10 seconds each with those words worth $1,000 each.

The winning player could choose to stop after either of the two were guessed or risk his/her earnings to that point and continue. On the third and final word, the player acted it out for 15 seconds and if the celebrity partner guessed it, the civilian player earned $3,000 more, for a total of $5,000.

If at any point the celebrity partners failed to guess a word correctly when time ran out, the contestant lost half of his/her money earned up to that point.

The original host was to be Larry Blyden and he taped a pilot on May 24, 1975 for Showoffs. Elaine Joyce, Ron Masak, Linda Kaye Henning, and Dick Gautier were the day's guests. The format used in the pilot was the same as that used in the first half of the series' run.[1]

Soon after the pilot had finished taping, Blyden went on a short vacation to Morocco. While driving to Tan-Tan, his rental car went off the road and overturned, knocking him unconscious. Doctors in an Agadir hospital were unable to contact Blyden's family for several days as Blyden had been carrying no identification.[2]

Blyden died on June 6, just twenty-four days before the series was to premiere. 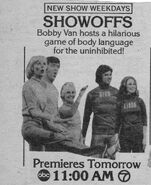 Reportedly, only one episode is known to exist and is among tape traders. The pilot with Larry Blyden and the Christmas Day episode from the final week are held by the UCLA Film and Television Archive.

Retrieved from "https://markgoodson.fandom.com/wiki/Showoffs?oldid=45848"
Community content is available under CC-BY-SA unless otherwise noted.