Say When!! is the four year old game show where contestants picked prizes while trying not to go over a predetermined amount.

On this show, two contestants picked off prizes from a group of four. Each time a prize was chosen, a new one replaced it. For each prize selected, its value was added to the player's score. The goal was to have the total of all the prizes chosen to come closer to a set amount than his/her opponent without going over. Anything over the goal amount was a loss. To prevent this from happening, a player in control could decide to "freeze" if the next prize chosen would put him/her over the top. If the contestant's total matched the goal, he/she not only won the game, but also won a "blank check", good for 100 cases of a product. The first player to win two out of three games won the match.

Art James sang "It's Christmas Time Again" on the December 24, 1964 episode, this was the first time he had sung on national television.

This was the first game show hosted by Art James.

At one time, Art was doing a plug for Peter Pan peanut butter. It seemed like he was doing fine, until the minute he put a knife into the jar, which caused the bottom of it to break off and the knife to go through it. He couldn't stop laughing while he finished doing the commercial. 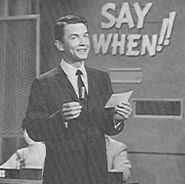 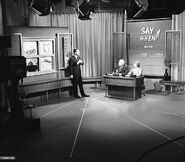 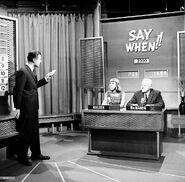 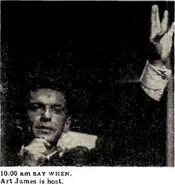 Only one episode is known to exist. A blooper clip also exists. An episode of this show aired on Buzzr as part of their 5th Annual Lost & Found week on September 27, 2020.

Retrieved from "https://markgoodson.fandom.com/wiki/Say_When!!?oldid=45370"
Community content is available under CC-BY-SA unless otherwise noted.