Raymond Neil Combs, Jr. or Ray Combs (April 3, 1956 – June 2, 1996) was an American comedian, actor, and host of the game show (The New) Family Feud (Challenge) on CBS and in syndication from 1988 until 1994 (he was later proceeded by original Feud host Richard Dawson in the syndicated version from 1994 until 1995). Following the cancellation of Feud, Combs attempted to get back into television with the short-lived Family Challenge (he was later replaced by Michael Burger when the series was re-titled as The New Family Challenge from 1996 until 1997) but his life had already taken a severe downturn including a divorce from his wife and a near-fatal car accident which ultimately led to his suicide in 1996.

Combs was born in Hamilton, Ohio on April 3, 1956. He graduated in 1974 from Garfield High School where he was an actor, senior class president and Boy State delegate. He declined a nomination to the United States Military Academy and served as a Mormon missionary for two yeas in Arizona.

Combs began performing comedy at Cincinnati's Red Dog Saloon, where he developed his best know shtick of audience sing-alongs of sitcom theme songs. In 1979, Combs sent a letter to David Letterman encouraged him to continue in comedy. In 1982, convinced that he was better than others he saw appears on The Tonight Show, Combs left his job as an Indianapolis furniture salesman and moved with his family to Los Angeles. He did well in a competition with more than 200 other young comedians an began doing audience warm-ups for sitcoms such as The Golden Girls and Amen. He became so popular, that other sitcoms changed their productions schedules just so they could have him warm up their audiences. Johnny Carson heard the audience's laughter and then invited Combs to perform on The Tonight Show in October 1986; The audience gave him a standing ovation.

In 1988, game show producer Mark Goodson and Howard Felsher gave Combs a seven-year contract to host a new version of the Feud. The program premiered on July 4, 1988 replacing The $25,000 Pyramid with Dick Clark on CBS' daytime lineup and a syndicated version was launched two months later on September 19. According to the late Feud announcer Gene Wood, Combs also toured extensively around the United States to promote the show and made guest appearances on Card Sharks (Eubanks) and The Price is Right (Barker) to discuss the new version of Feud.

On June 22, 1992; CBS expanded the daytime show from 30 minutes to an hour. A new "Bullseye" round was added and the show was re-titled Family Feud Challenge. On September 14, 1992, the "Bullseye" round was integrated into the syndicated run, which remain 30 minutes but was re-titled as The New Family Feud. Combs was one of the most seen emcees on television during the 1992-93 season, with an hour and a half of Feud airing five days a week.

Like his predecessor/successor Richard Dawson, Combs also had a trademark shtick with female contestants as well on a very few occasional episodes. However, unlike Dawson, instead of kissing them on the lips he would sometimes see a tall female contestant by swapping a pair of their stilettos with his dress shoes as he walks around in them on stage due to his short stature.

Midway through the 1992-93 season, ratings for the show began to plummet. CBS canceled the daytime version in early 1993 with the final new episode airing March 26 (reruns aired through September 10) as many CBS affiliates dropped the show entirely by that time. The syndicated version was also on the verge of cancellation (as many stations had also dropped that or moved it into overnight time slots). Jonathan Goodson, who had become chairman of Mark Goodson Productions after the death of his father in 1992 made the decision a year earlier to replace Combs with original host Richard Dawson in the hopes of spiking ratings. By all accounts, Combs was hurt by his dismissal from the show.

His final episode of Feud was taped somewhere in February 1994 and aired in first-run syndication on May 27 of that year. While that episode seemed like any other, during his final fast money bonus round, the five answers given by the second contestant each netted 0 points. Combs joked, "You know, I've done this show for six years, and this could be the first time I had a person that actually got no points and I think it's a damn fine way to go out. You thought I was a loser until you walked up here. You made me feel like a man Tim, give me your hand!" After signing off with ending credits rolling, Combs immediately walked off the set went to his dressing room to get changed, left the CBS Television City facility without saying goodbye to anyone got into his car and drove home.

Combs also made an appearance for the World Wrestling Foundation WWF (now WWE/World Wrestling Entertainment) as a guest ring announcer at WrestleMania VIII, where he amused the capacity crowd ay Indianapolis' Hoosier Dome by lashing into the team of The Nasty Boys, The Mountie and Repo Man with various scathing insults before being ultimately chased out of the ring. He later served as a guest commentator alongside Vince McMahon and Bobby Heenan at Survivor Series 1993 in a match between the Hart Family against Shawn Michaels and his Knights.

In addition to these two appearances, there were various WWF/WBF celebrity editions of Feud; Heenan and Combs also struck a friendship, which Heenan recounted in his autobiography nothing that he believed Combs felt demeaned by being a game show host.

Combs portrayed himself in episodes of In Living Color and 227 as Feud sketches and made an appearance on the TNN television series The Statler Brothers Show where he did a stand up comedy routine. In October 1993, a Feud video game featured Combs' likeness was released for the Super NES. A port of the same game would later be released for the Sega Genesis in July 1994.

In July 1994, Combs suffered an injury in one of his spinal discs in a car accident which left him in severe and continuous pain. He also went through financial problems just after two of his comedy clubs failed, and his home in Hamilton, Ohio went into foreclosure. In September 1995, Combs and Debbie, his wife of 18 years (with whom he had six children) separated. The couple reconciled, but later refiled for divorce.

Combs made several attempts to resurrect his television career, including taping a pilot for a talk show that was self-titled The Ray Combs Show which was ultimately not picked up. He hosted Family Challenge which also reunited him with Gene Wood as announcer from 1995-96 on The Family Channel; In 1996, for its second season he was later replaced by Michael Burger with Charlie Glaize as announcer as the show was re-titled to The New Family Challenge before it went of the air in 1997. Combs also made a number of appearances on Game Show Network. On May 27, 1996; Combs appeared on television for one final time, live on a Memorial Day edition of The Home and Family Show with Christina Ferrare and Chuck Woolery in which he discussed his experiences while hosting the show.

On June 1, 1996; police were called to Combs' home at 1318 Sonora Avenue in Glendale, California over reports of a disturbance. Combs had reportedly destroyed most of the inside of his house, and had also been banging his head against the walls. Shortly after police arrived, Combs' estranged wife Debbie arrived and informed them that Combs was suicidal and had spent the previous week in the hospital for a suicide attempt. He was taken by police to Glendale Adventist Medical Center where he was assessed by a medical doctor and placed on a 72-hour psychiatric observation hold. Early the next morning, on June 2, 1996 Combs died as he hanged himself in a closet with a noose made out of bed sheets. Ironically enough, his original successor/replacement Richard Dawson (although separate years between them) had also passed away on that very same day due to esophageal cancer sixteen years later in 2012. Additionally, Combs also died on his wife's birthday.

On June 7, 1996; Combs' funeral was held at The Church of Jesus Christ of Latter-day Saints in Glendale. His casketed body was flown back to his hometown of Hamilton, Ohio where he was interred at the Greenwood Cemetery. Combs was survived by his parents Ray, Sr. and Anita Jean Combs, his wife Debbie and six children.

Combs was deep in debt at the time of his death; only after his suicide did his widow (Debbie) learn of his financial difficulties. At the height of his career; he earned close to $1 Million per year, but reportedly had trouble managing his money. In addition of his two failed comedy clubs in Hamilton, Combs owed $100,000 in back taxes, $150,000 in loans and credit cards and had a $470,000 mortgage. The bank foreclosed on the family's Glendale home and Debbie was forced to sell off some of her husband's autographed photos and celebrity caricatures. A benefit held at the Laugh Factory in Hollywood netted $10,000 for the family. Johnny Carson, who had given Combs his first break in show business sent Debbie a check for $25,000 writing to her "I hope this will ease the burden".

"My years of working on Family Feud as the announcer on the show were very special to me. I met a lot of wonderful people, a lot of terrific families and I got to work with the amazingly talented Ray Combs. Ray and I had a lot of fun together at a few tapings. He was one of those rare people, who totally cared about what he was doing. I miss Ray a lot and on the occasion of Thanksgiving, I realize I am extremely thankful that I was able to know Ray Combs. To work with him, to laugh with him, he was an important part of my life. Ray had a quality that you really had to look hard to see. Behind all the pizzazz and the show business jazz, and the jokes and the laughs. Behind all of that there was a young man from Cincinnati, Ohio with an enormous heart filled with love for people especially children and love for what he did. It was a pleasure being around Ray Combs because he was filled with life. Everything he did was at a hundred and ten percent, his work and his living. We want to close this special by showing you some clips of Ray Combs at his best which was usually when he was hosting Family Feud. I'm Gene Wood, thanks for joining us". - Gene Wood (on Ray Combs' tragic passing at the closing of a Game Show Network Family Feud Thanksgiving marathon on November 28, 1996)

On November 16, 1997, the E! Network debuted their hour long documentary series about the life of Ray Combs, who committed suicide in 1996. Including his stints as the second host of Family Feud (1988-94) and first host of Family Challenge (1995-96), his appearance on The Tonight Show with Johnny Carson, and his family life, debt and emotional problems.

Card Sharks
The Price is Right 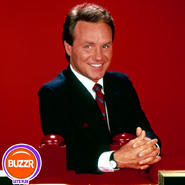