Play Your Hunch was a game show where two couples have to solve "problems" by using the choices that are marked as "X", "Y" & "Z".

Two teams of two contestants (mostly couples) faced a series of dilemmas with three choices (usually people) marked "X", "Y" & "Z". Couples played one at a time and alternating turns solving problems; before each question was asked, the couple in control had a decision to either play the question or pass it to their opponents. The couple playing the problem then had a few seconds to think it over; when a chime rang, the couple must then choose which choice is right. If they were correct, they win the dilemma, but if they were wrong, the opposing couple then got to decide from the remaining choices. Each correct answer scored a point & money ($50 in daytime and $100 on NBC nighttime), and the first team to score three points won the game, $150 in daytime or $300 on NBC nighttime, and in the CBS & ABC versions, won the right to play the "Last Straw" bonus game.

A later bonus round would be played for a prize, like a trip, an appliance, a car, etc. Either the show's assistant, or announcer Johnny Olson himself would hide behind one of three "doors" onstage; the couple would simply have to guess which "door" either of them was hiding behind.

The bonus game was discontinued when the show moved to NBC.

This was the first game show hosted by Merv Griffin. He left the show in 1962 to host his own talk show, The Merv Griffin Show which originally ran on NBC from 1962 until 1963, then in Syndication from 1965 until 1969 then on CBS from 1969 until 1972 and then again in Syndication from 1972 until 1986. Griffin would then produce & create his own TV game shows, more specifically Wheel of Fortune and Jeopardy!. On August 12, 2007, Griffin died due to prostate cancer at the age of 82.

This was also the first Goodson-Todman show with announcer Johnny Olson. During his 27 years with Goodson-Todman, Olson was heard on over fifteen of their shows. He also subbed for Merv Griffin on two occasions. 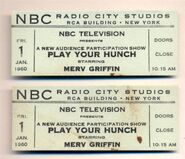 Some episodes exist, as GSN (and Buzzr as part of their "Lost & Found" week) has aired a few episodes with Merv Griffin in the past.