This is chronicling the British version of Card Sharks called (Bruce Forsyth's) Play Your Cards Right.

Two couples competed against each other. Each was assigned a row of five oversized playing cards. Each contestant had a standard 52-card deck; the ace ranked highest and the deuce (two) ranked lowest. The champion played the red cards on top, while the challenger played the blue cards on the bottom. A coin toss was used to determine who played red and who played blue.

Control of the board was determined by asking a survey question similar to the surveys done on Family Fortunes (Family Feud). Unlike the US version (Card Sharks), the questions were played more for laughs (for example: The question would be, "We asked 100 tattoo-artists - if somebody came in asking for a tattoo of Bruce Forsyth, would you try to talk them out of it? How many of them said that they would try to talk them out of it."). The couple who received the question would joke around with Bruce about the question and then gave a guess as to how many people gave the answer that Bruce gave. After hearing the guess, the opponent had to choose whether the correct number was higher or lower than that guess. Choosing correctly gave control of the board to the opponent; otherwise, the initial contestant gained control. The initial contestant would also gain control of the board if he/she correctly guessed the answer on the nose and thereby winning a case of champagne. Up to four toss-up questions were played per game.

Beneath each contestant's row of cards was a moving bracket bearing the team's name which would mark one of the cards as the "base card". Each couple's base card was the first card in the row of five. The winners of the question could choose to either play and keeping his/her base card, or change it with another card from the top of the deck. The couple then guessed whether the next (face-down) card in the row was "higher" or "lower"; if correct, he or she could continue to guess the next card after that and so on (if both cards were the same, the guess counted as incorrect; this brought up the catchphrase "You don't get anything for a pair - not in this game").

On an incorrect guess, the couple loses their turn and all the card turned over back to the base card. The other revealed cards were discarded and replaced by new face-down cards before the next question in the round. In this event, the opposing team received a free chance to play but not change the base card.

Contestants could also choose to "freeze", thus making the last revealed card the new base card and preventing the opponent from receiving a free chance.

If neither team guessed all the cards on their row correctly, another toss-up question was asked and the same procedures were followed until someone revealed all the cards in the row or the fourth question in the round was asked.

The first team to reach the end of the board won the game and (starting in the 1990s) a "Brucie Bonus." The first couple to win two out of three games wins the match and went on to play the bonus game for big prizes (later cash).

The fourth question in each round was a "sudden death" question in which someone would win the game on the next turn of the cards. Whoever won control of the board had the opportunity to play the cards (and could change the base card if desired) or pass them to theirs opponents (who could not change the base card and had to successfully clear the remainder of the row). If either team guessed incorrectly, their opponents automatically won the game.

If the match was tied after two games, a tiebreaker game was played to determine the winner. Contestants played rows of three cards instead of five, and three questions were asked instead of four, with the third being sudden death.

The winning couple got 200 points to begin with. Bruce would then ask a question, if they got it right, they'd win an extra 50, if they got it wrong, they lost 50. There were two rows of three cards dealt out (going from left to right, and upward), and one final card at the top. At the start of each row, they could change their card. At the start of the second row, they got an extra 200 points. The rules are the same as in the previous game, but they had to bet on their answer (minimum of 50.). When they got to the final card, if they had 4,000 or more, they could play for the car (which was a separate game on the US version.). They were asked a simple question (usually to name 5 of something - no-one ever got this wrong), and then predicted higher or lower for the final card. If they were right, they would win the car. If not, they won a prize based on their score.

In the 90's version, points became pounds, but the rules remained the same. Also, on the final card, if they have £4,000 or more, and they were wrong, they would just have the money. What was emphasized was that their money was safe.

If the couple got to the final card with under £4,000, they could choose to take the money, or gamble all of it on the last card - with Bruce emphasizing thus: "The rules are strict here - it is all or nothing". The maximum amount of money that could be won was £17,600, which was never achieved. (The highest win was £9,500.)

The rules of the 2002 revival were partly based on the changes made in the 2001 revival of Card Sharks in the United States. All 13 cards from the suit of hearts from the 'Two' to the 'Ace' were put out face down. Four couples would then come on, and the two couples with the two highest cards would go through to the main game (the couple who picked the highest card was red team.). This was just an opening game. After this, Bruce's gag was to say "Well done you winners, and so sorry losers, we really are sorry to lose you so early in the show...tough." - followed by audience laughter. The rules of the main game were exactly the same as in the original version, except the "Brucie Bonus" was £1,000. If one couple won both the games, the losing couple would be sent home with a case of champagne before the break, otherwise, the losing couple would get to keep the £1,000 for winning their one game (there was no money awarded for the tie-breaker).

In the Cash Cards, Bruce would first ask the winning couple a ridiculously hard, trivial or stupid question. They often pondered for a few seconds over this, then Bruce said "Aren't you glad you don't have to answer a question like that?", to which the audience would laugh - except that on at least two occasions, the contestants correctly answered the question, shocking Bruce, who accused the contestants - though in a humorous manner - of "ruining the show", prompting much more laughter from the audience. In the Cash Cards, this time, the couple were given £1,000 to start with and their minimum bet had to be £100, but they could bet the whole lot if they wanted to. If the couple survived the first three cards, another £500 would be added to the total. On the final card, the couple had to bet at least half the amount they had at that point (as was the case on all runs of the American version.).

If a couple bet on the whole lot the wrong way during the first three cards, that card would be put on the row above and the additional £500 would be added on. If there was a pair revealed in the Cash Cards, the couple didn't lose any money, they moved on to the next card. If the last two cards on a row were a pair, the second card would be used as the base card for the row above.

"What a lovely audience! You're so much better than last week."
"It's nice to see you, to see you, nice!"
"I'm the joker in the pack, which makes me such a lucky jack, and here they are, they're so appealing, ok dollies, do your dealing!"
"You don't get anything for a pair, not in this game."
"What do points make? Prizes!"
"What do pounds make? Rich people!"
"Don't touch the pack, we'll be right back!"

At the time, Bruce Forsyth was one of the potential candidates to host the CBS daytime revival of Card Sharks in 1986. However, he hosted the short-lived game show Bruce Forsyth's Hot Streak (a Reg Grundy produced show) for ABC Daytime. The job for the network version ultimately went to Bob Eubanks instead. Forsyth has passed away due to bronchial pneumonia in 2017. 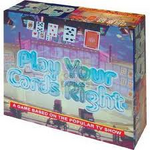 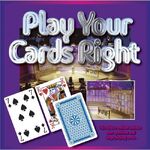 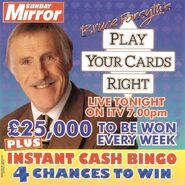 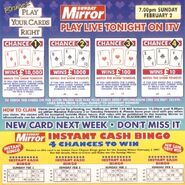 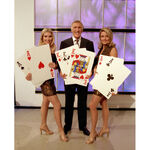 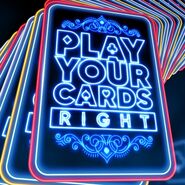 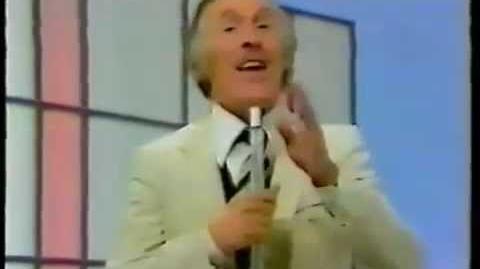 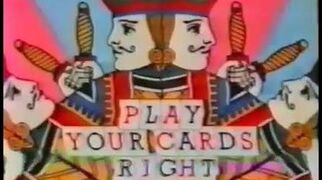 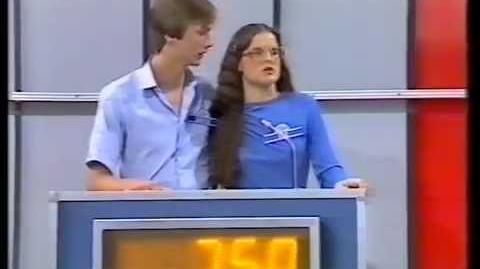 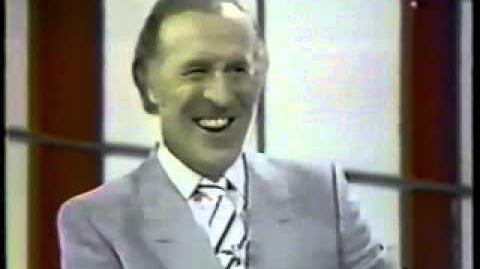 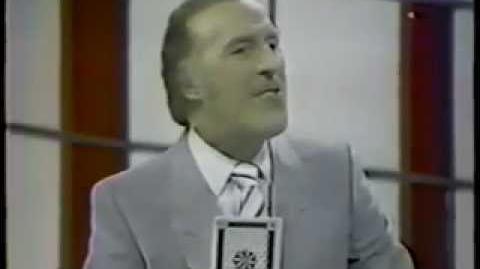 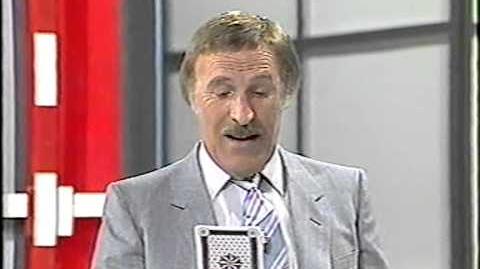 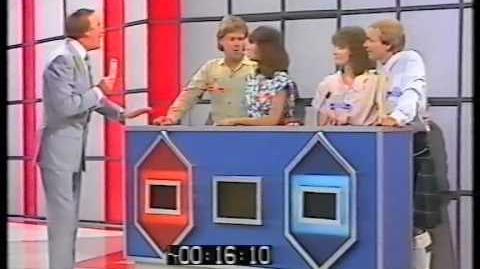 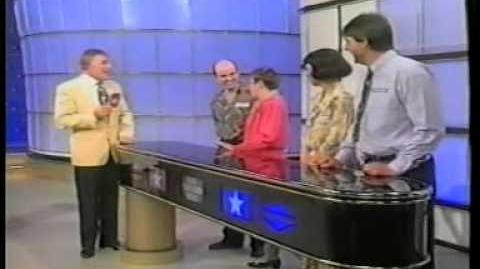 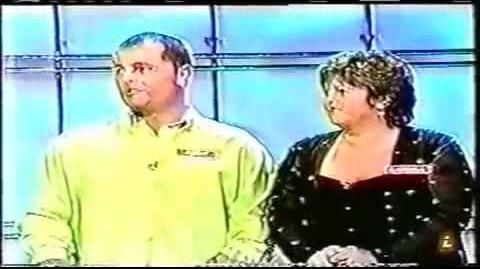 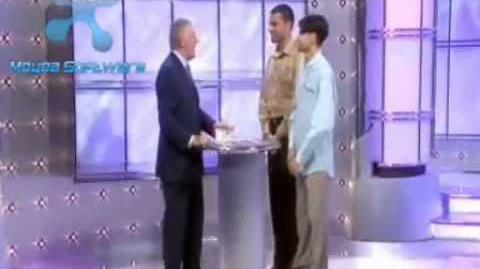 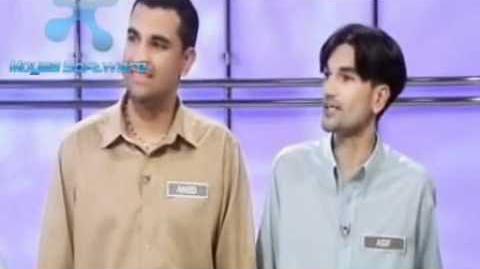 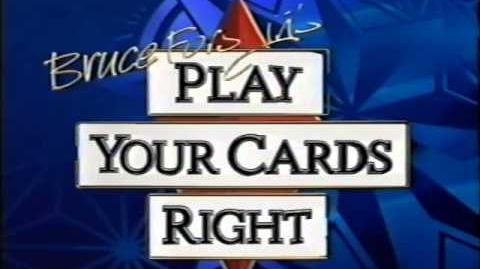 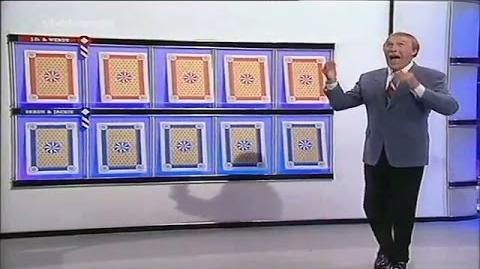 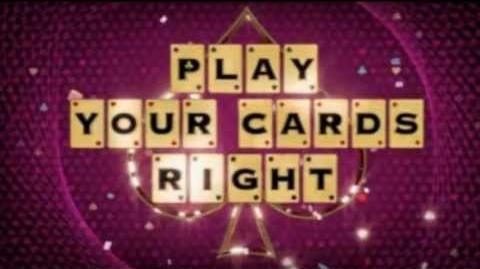 Retrieved from "https://markgoodson.fandom.com/wiki/Play_Your_Cards_Right_(United_Kingdom)?oldid=38003"
Community content is available under CC-BY-SA unless otherwise noted.