Philip Marlowe was a television show.

The private detective Marlowe (as portrayed by Carey) departed very much from the original character. NBC-TV financed the original pilot for a Marlowe series starring Carey, but sold te program an Carey to ABC which revamp it.

The show debuted on October 6, 1959 with the episode "The Ugly Duckling" with Virginia Gregg and Rhys Williams.

The program's lack of success was attributed to its similarity to other contemporary detective series.

A board game called Philip Marlowe The Exciting Detective Game was released by Transogram in 1960.

Based on a series of novels by Raymond Chandler. 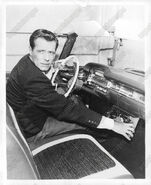 Retrieved from "https://markgoodson.fandom.com/wiki/Philip_Marlowe?oldid=42331"
Community content is available under CC-BY-SA unless otherwise noted.