Mark Goodson Wiki
Register
Don't have an account?
Sign In
Advertisement
in: Now You See It, Game Shows N-Z, CBS Daytime,
and 2 more

This is chronicling the 1989 version of Now You See It!

The main game principle was based on the word search concept. The game board had four rows ("lines") with 14 letters of the alphabet ("positions") in each row. The host of the show read general-knowledge trivia questions with single-word answers that were concealed within the jumble of letters on the board for that round. The answers on the board were always written horizontally from left to right.

Two new contestants competed to find the answers to the host's questions. Scoring was determined by how much time was left on the clock when the contestant buzzed in; the clock started at 100 points and decreased by 5 points as each 1/3 second passed. If nobody guessed the correct answer when the clock reached 25 points, the host gave the line number that the word was on. Halfway through the round, points were doubled and the contestants were given a new board. Later shows had the points be doubled later on during that second board when time was running out. The first player to reach 1,000 points won the round and competed against the show's returning champion in the championship round.

On team celebrity shows since there were four teams of two stars competing, each pair of teams played their own board. The rules remained the same except that points were doubled after the first three questions, and it took 500 points to go to the championship round, which only one member of each team can play.

In this round, the host gave a category, and a new board containing six words in that category was revealed. The first contestant to buzz-in and find one of those words was given 20 seconds to find the five remaining words to win the board. If unable to do so, the opponent was given an additional five seconds to find one word, with the contestant hitting his/her button once he or she finds a word, winning the board if successful; otherwise, the board went to the opponent. Each board was worth money; the first board was worth $200 and each board after that was worth $100 more than the previous one. The first player to reach $1,000 or more kept their money and won the game and played the solo round.

The bonus round on this show was better known as the "Solo Game". It was played the same on all versions of the show. The winner of the main game was given a new board and 60 seconds to find ten words on that board. Once the host read a clue to one of those words, the contestant used an electronic pencil to circle the word that was being guessed and call it out. The contestant had the option to pass at any time and return to that question later. Each correct answer was worth $100, and if all ten words were found before time expired, the contestant won a cash jackpot which started at $5,000 and grew by that amount every day until it was won or reached $100,000. The highest won was $50,000.

A returning champion would return a maximum of 5 days regardless of how many jackpots he/she won. 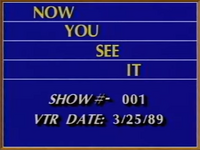 This version replaced the Bob Eubanks-hosted revival of Card Sharks which ran from January 6, 1986 until March 31, 1989. When Henry's NYSI was replaced it was replaced by a daytime version of Wheel of Fortune hosted by Bob Goen.
It was rumored that Henry himself requested GSN to not rerun his version because "it could harm his credibility in the news business". However, Adam Nedeff debunked this. 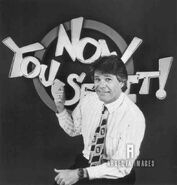 See Also: Now You See It! (1989)/Episode Guide
This series presumably exists in its entirety.