Missing Links was a game show.

A panel of three celebrities faced a studio contestant who came in with an unusual story. He/she gave a statement with a blank at the end or near the end, and then each panelist tried to guess the missing word. A correct answer from one celebrity won money for the contestant (unlike most panel shows using this type of format), but an incorrect answer passed the turn to the next star. If all three missed, the host gave the starting letter to the answer and the round continued as before.

Three guests played each day, with the final guest being a celebrity.

This was the last game show Dick Clark hosted before the Pyramid.
It was on this game show that when Nipsey Russell was a panelist, McMahon or Clark would always ask him to do a poem. That started Russell's trademark to do poetry when guessing on other game shows. 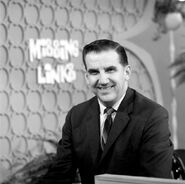 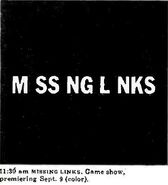 The series is believed to have been destroyed as per network policies of the era. The December 24, 1964 episode is held by the UCLA Film and Television Archive.