This is chronicling the short-lived 1998 version of Match Game. Where it mostly had drastic changes such as five celebrities instead of six and pun-laden categories replacing A or B along with being considered by many game show fans as one of the worst revivals of all-time.

This version was the same as it has always been except for a few differences which will be mentioned as we go along. There were five stars instead of six (similar to Family Feud 1994-95 with four contestants of two teams instead of five) and like in the 1990s versions, everybody plays all rounds. Also instead of choosing A or B, contestants now chose a pun-laden category. Once a category was chosen, Burger read the statement, and the stars wrote answers on their cards. When they were finished, the contestant gave his/her answer and the panel showed their answers one at a time. Each match was worth 1 point in round one and 2 for round two. After one contestant played his/her question, the other contestant played with the question unchosen. The player with the most points went on to player Super Match.

A prior studio audience was asked to give its best response to a fill-in-the-blank phrase, and its three best answers were placed and hidden away on a game board. Each one was assigned a dollar amount according to the popularity of each answer; the top answer was worth $500, the middle answer was worth $250, and the least popular was worth $100. Once the question was revealed, the winning contestant selected three stars who gave their answers to help out the contestant. When the answers were given, the contestant then chose which answer to use or reject them all and give an answer of his/her own. When all was said and done, the answers were revealed one at a time starting with the least popular answer and ending with the most popular. If the contestant can match any of the answers, he/she won the money attached to the answer.

In the Head to Head Match portion, the contestant then had the opportunity to win a cash prize equal to 10 times what he or she won in the Audience Match (therefore, $5,000, $2,500 or $1,000) by matching another fill-in-the-blank response with a celebrity panelist of his or her choice. The winning contestant chose which star to play with, at which point the chosen celeb went to a separate podium instead of at their desk like other previous versions before this. Burger then read another fill-in-the-blank phrase after which the chosen star wrote his/her answer. The winning contestant then gave his/her answer after which the chosen star revealed his/hers and if they match, the winning contestant won the grand cash prize. If he/she doesn't make a match, not only the contestant kept the audience match winnings but also won a consolation prize.

In order to win the money, the contestant had to match his/her chosen celebrity's response exactly or it cannot be accepted; this meant that multiple forms of the same word, e.g. singular or plural, were usually accepted whereas synonyms were not.

Like the 1990 version, the Head-to-Head prize was not an additional cash prize, but an augmentation to whatever top prize was at stake. And in the event the contestant didn't match in the Audience Match but managed to match the celebrity in Head-to-Head, that contestant still won $500.

Some of the elements from this version (i.e. five celebrities, pun categories) came from the unsold pilot called MG2 or MG2: The Match Game hosted by Charlene Tilton (Lucy Ewing of Dallas fame) from 1996.
Rondell Sheridan was also one of the five panelist on the unsold pilot of MG2 from 1996.
In this version of the Head-to-Head match, the contestant along with his or her celebrity partner were allowed to make eye contact which was never allowed in other previous versions before it.
Just like the current syndicated version of Family Feud (Harvey), the question and answers can be "suggestive" and "raunchy".
At the end of each episode, although the name and logo are still in tact. However, it used an alternate announcement by Boland saying: "This has been a Mark Goodson Television Production for..." followed by the appearance of a Pearson Television logo. 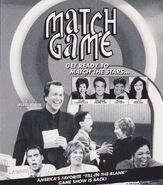