This is chronicling the 1988 version of the Feud. This version was also formerly later known as The Family Feud Challenge on CBS Daytime until 1993 and as The New Family Feud in Syndication until 1994.

At the beginning of each round, two members of each family come up to the main podium and play a mini-round for control of the question called "Face-Off". The host announced how many answers are on the board (which are always in order based on popularity), and then read a survey question and the first player to buzz-in gets to answer. The player to give the number one answer or have his/her answer be higher than the other player's answer won control, but without the "play/pass" option seen on other versions. In case of a tie (both answers with the same number of people who gave it) the player who answered first won control. If neither player gave an answer on the board, the players at the main podiums get a chance to answer for control.

The family that won the face-off earns control of the question. The controlling family's job is to reveal the remaining answers hidden on the board with each correct answer adding points to the bank above the board. The answer's value is determined by how many people who gave it. Each player on the controlling team in turn gave an answer and if the answer he/she gave is correct, it is flipped over and revealed. Revealing all the answers on the board won the round (this is classified as a "Clean Sweep"). Giving a wrong answer at any time earned a strike; getting three strikes caused the team to lose control of the question, giving the opposing family a chance to steal by giving one correct answer. A successful steal won the round, but an unsuccessful steal gave the round to the first family. The winners of the round took all the points in the bank. From 1992 to 1995, the value of a "stealing" answer added its point value to the bank.

The first few questions had its values be worth the number showing. Later on in the game, the values of all the questions would be doubled; and still later, all the point values would be tripled.

Values from each year

November 1988-90 and first half of Challenge: Single/Single/Double/Triple

1992-95 and second half of Challenge: Bullseye or Bankroll/Single/Double/Triple/Triple

Starting in 1992, Family Feud instituted a new Bullseye round. This was the round that affected the grand prize for either family if and when they make it to Fast Money. In this round, both families started with a bankroll of $5,000 ($2,500 in the first half of the Family Feud Challenge). Five questions were asked to each pair of family members in a Face-Off fashion, and only number one answers counted. The first player to buzz-in with the number one answer added money to their own Fast Money bank; this resulted in a possible $10,000 in the first half or $20,000 in the second half. The syndicated version used this round from 1992-1994, with the doubled values.

Here how they scored for each question:

In the daily syndicated version, known as The New Family Feud, both families started at $5,000 as this resulted for a possible $20,000. additionally, those same amount were also played at the Opryland road show in 1993 as well.

NOTE: The number of questions along with its amounts would also be used in the O'Hurley version of the Bullseye Round from 2009 until 2010.

The first family to reach 300 points won the game. For most versions, the goal is 300 points. Until 1992, dollars were used instead of points.

The winning family went on to play Fast Money for a grand cash prize. The winning family chose which two players will play the game. The first family member stood at center stage while the second family member went off stage to a soundproof area. The first player has 15 seconds (later 20) to answer five Family Feud questions. He/She has to give the most popular answer to each question. When he/she was done, the answers were reveled on a different board followed by the number of people who gave them. After all the answers were revealed and scored, the second player came out and took his/her turn. The second player had 20 seconds (later 25) to answer the same five questions but with one exception: he/she cannot repeat any of the answers previously given by the first player or a double buzzer will sound, at which point the host says, "Try again." The contestant must give a different answer (the second player will also be charged for similar answers or an answer which fits into the same category as the first player's answer). When the second player was done, his/her answers were revealed and scored. The family wins $5 for each point made in the round, but if the two playing players reached 200 points or more, the family wins the grand cash prize.

NOTE: Very rarely, the first contestant from the winning family playing Fast Money would get 200 points and win the big money all by himself/herself. During Ray Combs' tenure, whenever that occurred, he would trick the second player into thinking that the first player did terribly and then ask him/her five phony ridiculous questions.

ADDITIONAL NOTE: The syndicated versions' amount was also carried over in the Anderson version until 2001 when it changed from $10,000 to $20,000.

Here are the max values in terms of Bullseye/Bankroll amounts:

The 1988–1994 version carried special tournaments for the four highest winning families from certain periods returning for a Winner-Take-All Tournament of Champions. These were rarely held at first for both the CBS and syndicated versions.

The main game rules applied, but if a family reached 200 points in Fast Money, $5,000 went into a jackpot that started at $25,000 and went up to potentially $55,000 on the CBS version. Likewise, on the syndicated version, the jackpot started at $50,000 and went up to $10,000 for each time Fast Money was won, up to a possible $110,000. If the score was less than 200, nothing was added to the jackpot, as the $5 a point rule was discarded for the tournament. Each semifinal was the best-of-three games, with the first family in each one to win two games advancing to the finals, which was also a best-of-three match. There was no Fast Money round played during the finals. The scoring was similar to the 1984–1985 season (single-single-single-single-double-triple) or the regular CBS/Syndicated version from late 1989 to 1990 (single-single-single-double-triple) in the finals, with the first family to reach $400 winning the game instead of $300. The first family to win two out of three games won everything in the jackpot in addition to what they won in the regular game. Again, no Fast Money was played.

No additional tournaments were conducted on the syndicated version after the second season. The CBS version continued conducting them, but in mid-1990, tournaments were held every month, with the top four money-winning families of the previous month returning. The main game point goals for winning a semifinal and a final game were the same, but the match format was changed from the best-of-three to a one-game match for both the semifinals and the finals. Thus, the potential maximum was lowered to $35,000.

This version replaced a brief revival of The $25,000 Pyramid hosted by the late Dick Clark.
The sound effect from the "Fast Money" round (which has been carried over in other previous versions since then) was originally used from the short-lived ABC daytime game show Trivia Trap to reveal the four choices to a question.
This was the only version to nix the "Play or Pass/Pass or Play" option where the family was forced to play the whole entire round until they got a "clean sweep" or "three strikes". In the original 1987 pilot, that option was still used.
In the pilot, a different *ding* was used for the main game.
In the pilot, the stealing family can confer until the triple buzz sounds.
Before Combs, ex-NFL football player for the New York Jets, Joe Namath (or Broadway Joe) was almost selected to host the revival.
A primetime special was going to be premiered in primetime on CBS on October 19, 1988; however, it never happened.

This version was quite possibly going to be replaced by a revival of Match Game hosted by Ross Shafer on CBS for its second season. Though this was even indicated by Shafer on the series' finale when it aired on ABC in 1991, it ultimately never came to pass.
This was the third hour-long Goodson-Todman game show (i.e. Family Feud Challenge) the honors of being first goes to the 1972 revamp of The Price is Right while second goes to The Match Game-Hollywood Squares Hour in 1983.
Ray Combs hosted one more game show in his lifetime for The Family Channel (originally CBN/Christian Broadcasting Network, then Fox Family, later ABC Family, now Freeform) called Family Challenge in 1995 before committing suicide in 1996. Combs was later replaced by Michael Burger in 1996 when the title of the show was renamed to The New Family Challenge before going off the air in 1997.
On some episodes, due to his short stature, Combs would sometimes borrow a pair of high heels from a female contestant as part of his shtick.
The 1994-95 Dawson era set was a modified version of the 1993 Opryland tour set from the Ray Combs era.
When Richard Dawson returned to the show in the syndicated version from 1994 until 1995. The number of family members were reduced from five to four, similar to Match Game '98 when celebrities were reduced from six to five.

In Dawson's first episode from 1994 (originally August 1994) after the "chance to steal" segment", he quickly forgets the other three answers on the board of the top six in slots 2, 4 and 6 to the question "Name a place you're likely to see a naked body" by throwing to a commercial break. However, just before the break the other three unrevealed answers were: 2.)Nudist Colony, 4.)Morgue and 6.)Hospital.

The theme song from this version has been used and carried over since the Karn era. additionally, it was also used in the Czech Republic version called Co na to Češi [What do Czech] (a reboot of 5 proti 5 [5 Against 5]) hosted by Tomas Matonoha since 2016. 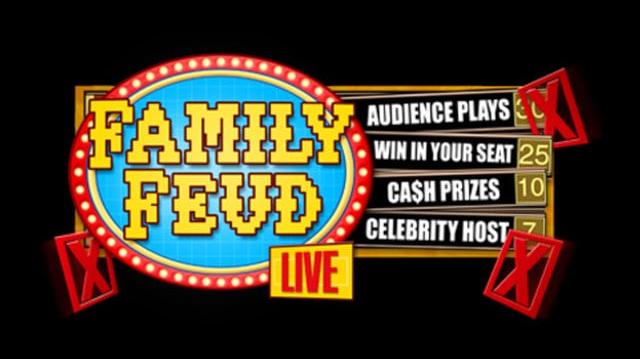 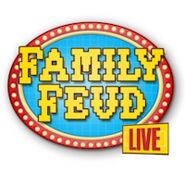 A live stage version of Family Feud originally debuted at the Foxwoods Resort & Casino in Connecticut along with several rotating host including: Michael Burger, Marc Summers, Doug Davidson, David Ruprecht, Bob Goen and Roger Lodge. The show is produced in association with RTL Group officials, including former television director Andrew Felsher, producer Cathy Dawson and others who have worked on the original TV version along with other game shows. It also briefly ran at two Atlantic City casinos in 2006.

In 2013, a touring version of the live stage show was played mostly at state fairs in the US and Canada, including the Calgary Stampede. Actress and former talk/reality show host Caroline Rhea currently hosted this edition, making her the first woman to host an official iteration of the classic game show. 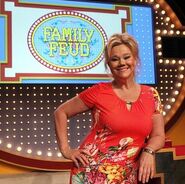 The set mostly resembles the 1988-94 Combs era and the format emulates from the TV show itself (except the 1994-95 era with four families on each team instead of five and excluding the Bullseye Round/Bankroll Game), two sets of five contestants (usually unrelated audience members) go through the main portion of the game. After that, two additional audience members play the Fast Money round. additionally, video clips of funny moments from the many incarnations of the series along with a brief history of the show itself is also shown. 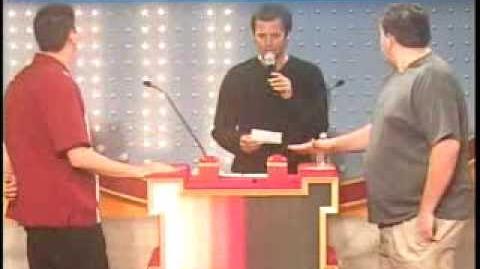 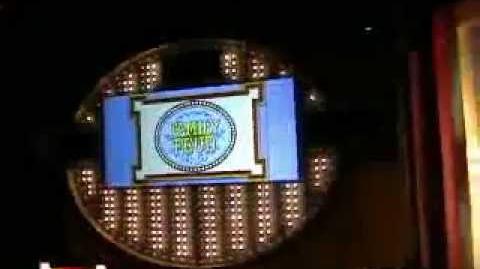 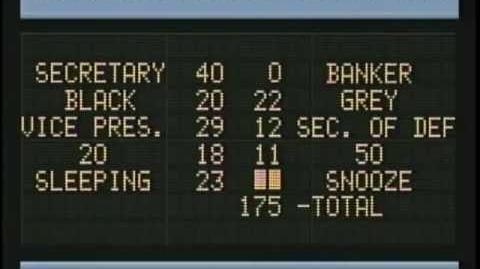 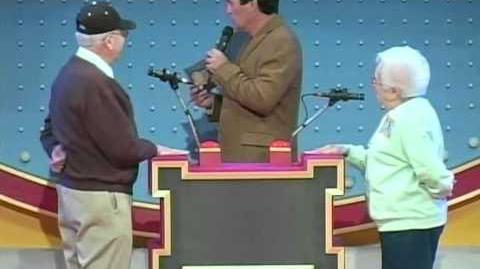 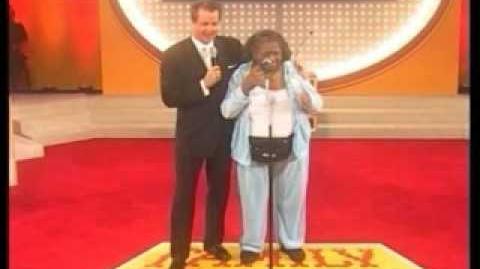 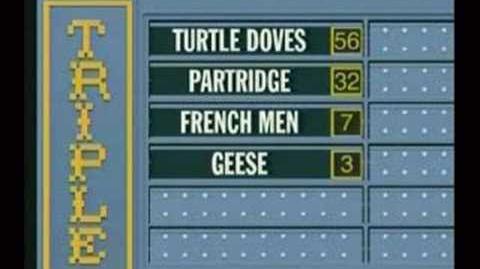 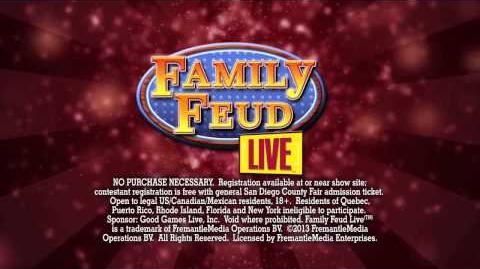 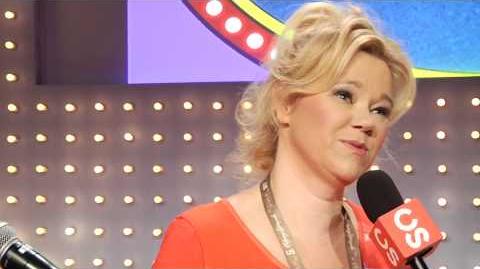 All episodes exist and have been aired on GSN and Buzzr at various times in the past.

These are the stations that carried the syndicated 1988-1995 version of "Family Feud".