Family Feud is a popular game show based on the big money "Supermatch" bonus round from Match Game where two families battle it out by answering surveys to win money. The first to reach a set number of money (usually 300 points/dollars) gets a chance to play Fast Money for a grand cash prize (i.e. $5,000 in the daytime version & $10,000 in the syndicated version).

At the beginning of each round, two members of five groups where each family member came up to the main podium and played a mini-round for control of the question (identified as the "Face-Off"). Dawson announced how many answers are on the board (which are always in order based on popularity), and then read a survey question and the first player to buzz-in gets to answer. The player to give the number one answer or have his/her answer be higher than the other player's answer won control. In case of a tie (both answers with the same number of people who gave it) the player who answered first won control. If neither player gave an answer on the board, the players at the main podiums get a chance to answer for control. The player that won the Face-Off has a decision to either let his/her family play the question or pass the question to their opponents.

The family that won the face-off earns control of the question. The controlling family's job is to reveal the remaining answers hidden on the board with each correct answer adding money to the bank above the board. The answer's value is determined by how many people who gave it. Each player on the controlling team in turn gave an answer and if the answer he/she gave is correct, it is flipped over and revealed. Revealing all the answers on the board won the round (this is classified as a "Clean Sweep"). Giving a wrong answer at any time earned a strike; getting three strikes caused the team to lose control of the question, giving the opposing family a chance to steal by giving one correct answer. A successful steal won the round, but an unsuccessful steal gave the round to the first family. The winners of the round took all the money/points in the bank.

The first few questions had its values be worth the number showing. Later on in the game, the values of all the questions would be doubled; and still later usually on the last question, all the dollar values would be tripled.

The first family to reach a set number of money won the game. For most of this version, the goal is $300. From July 12, 1976-March 2, 1979 on ABC daytime, the first few months of the 1977-1985 syndicated version and pilot episode, the goal was $200; but in the final season of the Dawson run, the goal was set to $400. When the game takes too long to reach the 300/400 goal, Richard goes to the controlling family to tell them that each teammate has three seconds to answer once he reads the question to them during the TRIPLE Round.

By the fall of 1981, departing families would be guaranteed $100. About a year later, said minimum increased to $250.

Due to Dawson giving away boxes of lollipops to some of the studio audience members (mainly children), a Lollipop Tree was introduced from March 2, 1983 all the way through June 14, 1985, where a tree of Tootsie pops was placed next to the fifth player on each team. If he/she chose a lollipop that had a black stem on the bottom, the family won a $100 bonus, which did not affect the outcome of the game. In the finale, when one family member failed to find a lollipop with no black stem on the bottom, Dawson used a black marker while coloring the bottom black as the family got a $100 bonus regardless.

NOTE: Originally, only one Lollipop in each tree had a black stem, but within weeks, there were ten on both trees.

The winning family went on to play Fast Money for a grand cash prize. The winning family chose which two players will play the game. The first family member stood at center stage while the second family member went off stage to a soundproof area. The first player has 15 seconds (later 20) to answer five Family Feud questions. He/she has to give the most popular answer to each question. When he/she was done, the answers were reveled on a different board followed by the number of people who gave them. After all the answers were revealed and scored, the second player came out and took his/her turn. The second player had 20 seconds (later 25) to answer the same five questions but with one exception: he/she cannot repeat any of the answers previously given by the first player or a double buzzer will sound, at which point the host says, "Try again." The contestant must give a different answer (the second player will also be charged for similar answers or an answer which fits into the same category as the first player's answer). When the second player was done, his/her answers were revealed and scored. The family wins $5 for each point made in the round, but if the two playing players reached 200 points or more, the family wins the grand cash prize.

On the ABC run, families retired from the show after winning over $25,000, a limit which had been lifted during the final season to $30,000. On the syndicated series from 1977 to 1985, two new families competed on each show.

As mentioned above this article, the format of this show was inspired by the bonus round from another classic Goodson-Todman game show Match Game called the big money Supermatch (sometimes called "Audience Match").

In 1975, Before changing its name (and later its format) to Family Feud, the show was originally titled as Fast Company. (click on the title for details)

Before Feud, Dawson hosted a locally-produced game show called Lucky Pair (created by Bob Barker) from 1970 until 1971. In addition, he also hosted a short-lived revival of the classic 1950's panel game Masquerade Party (under the Hatos-Hall brand at the time) from 1974 until 1975. prior to this, he was also a frequent panelists on Match Game until 1978.

Feud is one of two Goodson-Todman/Goodson game shows in history that has a share of multiple hosts (mainly six), the second one of that nature is To Tell the Truth which in general mainly consisted of nine multiple hosts.

As mentioned above, the fast money blip sound effect was never used in the original 1976-85 version but was debuted in the Combs version along with the other previous incarnations of the franchise since 1988.

Two years later, after the show's cancellation in 1985, Dawson played as a sinisterly evil game show host named Damon Killian in the 1987 film (loosely based on the 1982 novel written by famed horror writer Stephen King) called The Running Man where convicted criminals (runners) must escape death at the hands of professional "Stalkers".

The show taped as many as twenty episodes every other week; four tape dates were arranged with two of them for the ABC Daytime version using fourteen families, and the rest for the Syndicated version using twenty families.

Dawson hosted a pilot for the possible NBC daytime revival of You Bet Your Life in 1988 which was never sold later on.

After Ray Combs was fired from the show, in 1994 Dawson returned as host after a nine year absence for one more season until 1995.

The ABC run was set to end on Friday June 28, 1985, according to newspapers via Associated Press. But for reasons that remain unclear to this very day, it instead ended two weeks earlier. In 2022, Bob Boden confirmed to Connor Higgins, who did a series of videos on the history of Family Feud, that the final two weeks never aired originally.

Family Feud has been referenced, featured or spoofed in the following:

Behind the Scenes Specials[]

On November 20, 2008, an episode of InFANity on the TV Guide Channel hosted by Lisa Joyner features a look at the show which includes a retrospective of its hosts along with an interview of its fifth former host John O'Hurley along with the origins of the survey answers and memorable contestants.

Game Show Marathon was hosted by Ricki Lake and announced by Rich Fields along with Todd Newton as the prize delivery host featuring six celebrity playing seven classic game shows. The show was filmed at CBS Television City in Hollywood and aired on CBS from May 31, 2006 until June 29, 2006.

Just like in the civilian version, teams competed to reach 300 points. The points doubled in round four and tripled in round five and beyond. In addition, The Fast Money round was played the same way as the civilian version as well including the time limits (first player [20], second player [25]) except that after one or two players were able to reach or exceed 200 points, the celebrity family would win $100,000 plus a Gameshow Marathon trophy. In addition, the home viewer won $50,000. 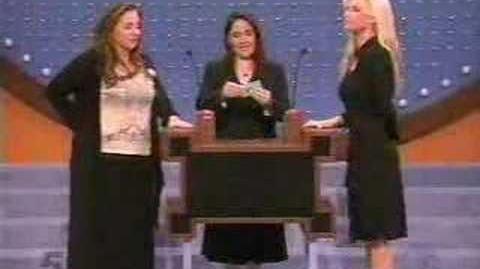 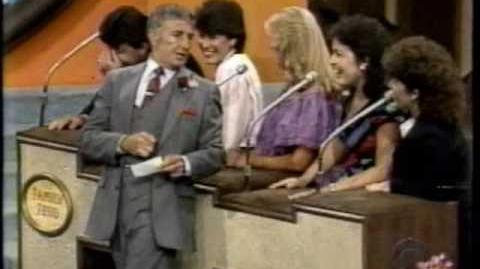 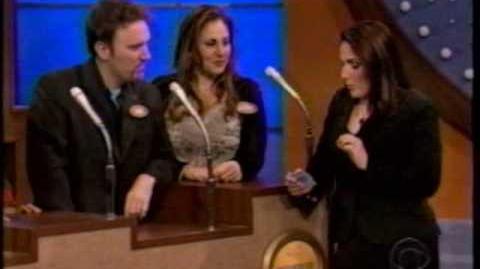 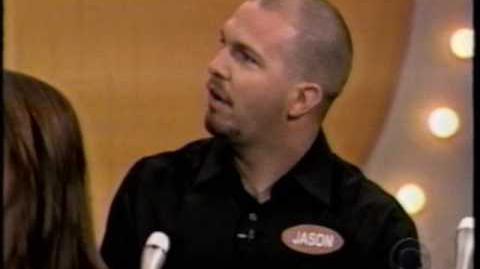 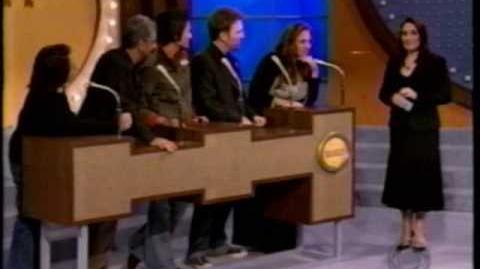 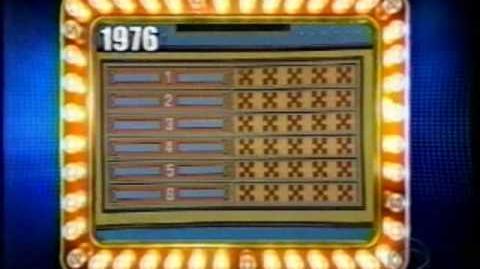 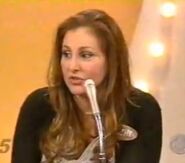 The buzzers on the G$M episode of Family Feud's face-off podium were red where in the actual show they were yellow during the whole entire series as they were never red until the Combs version in 1988 and all other previous versions since then. Plus, the lights wiped-in rather than just plain flash.


In Fast Money, the time limits 20/25 seconds were used this time around instead of 15/20 from the original.


Similar to the original 1976-85 Dawson version, the "Blip" SFX from the Fast Money Round was also "absent" from this version as well.


For the seventh and final Home Viewer Question based on a 1976 episode of Feud in which Dawson asked "Give a word polite people use instead of cursing" the choices were...

Although it was never answered in the next episode, the correct answer was #2 instead.

The winner of the episode (and the show in general) was Kathy Najimy in particular.

All episodes exist and have been rerun on GSN and Buzzr.

Recorded in Hollywood, California at ABC Vine Street Theater May 1976 (Pilots), from July to August 1976, and ABC Television Center Stage 54 from August 1976 to May 1985 (Series). All sections will be eventually completed. Winners are bolded.

The Syndicated episodes don't have air dates due to bicycling. For Syndicated Celebrity Specials, the airdates are taken from NBC affiliates such as WNBC in New York City.

These are the stations that carried the syndicated 1977-1985 version of "Family Feud."

An asterisk (*) means that this station is (or was) an NBC O&O and was among the first to carry this version.