Double Dare (not to be confused with the different formatted and much more successful 1980s kids game show on Nickelodeon of the same name) was a game of knowledge & nerve that tested people’s knowledge on various subjects.

Two contestants are placed in soundproof booths trying to guess identities of famous people, places & things. At the beginning of each subject, the home viewers were shown the answer. Alex would advise the home viewers to cover, close or look away from their TV sets should they wish to play along at home with the studio players. The contestants are read up to 10 clues to the given answer. The clues got easier as time progressed. As soon as a player buzzed in, the opponent's booth was closed and was deprived of seeing & hearing. If one should answer incorrectly, that person's booth was closed and the opponent's booth reopened and the opponent received a penalty clue. A wrong answer on a penalty clue reopened the first player's booth putting that player back into play, but never gets to see that clue. If one should buzz in and guess correctly, that person won $50 and can "dare" the other person for double value/$100 should he/she answer incorrectly (if the correct answer was given on a penalty clue, that became the "dare clue"); if successful, the other player can be "Double Dared" to try to answer again, this time for $200 to the daring player. If the dared player got the answer right, he/she won $50 if it was a dare or $100 if it was a double dare. If the daring player elected not to take the "Dare" or "Double Dare", Alex would read the "(Double) Dare" clue just for fun after which the supposedly "(Double) Dared" player made a guess just for fun. The first player to win $500 or more won the game and the right to face the spoilers for $5,000. The losing contestant kept his/her money won in addition to parting gifts.

Beat the Spoilers (Bonus Round)[]

Championship players stayed on the show till they lose a game or won (at least) $20,000.

In the pilot, the board has ten clues instead of eight, and five clues are given to the spoilers instead of four.

The main theme song from the show was re-used on the original 1978-81 version of Card Sharks hosted by the late Jim Perry and was announced by the late Gene Wood much later in its lifespan. It was also remixed for the Joel McHale reboot on ABC as part of a block called "Summer Fun & Games" in 2019.

The "Wubba" sound when the shutters opened was later reused as a sound effect for the Penny Ante game in The Price is Right as well as the CBS version of Tic Tac Dough, The Joker's Wild and Break the Bank (1985).

This was the first Goodson-Todman game show hosted by the late Alex Trebek. His second one was Classic Concentration in 1987 and his third and final Goodson based show was a short-lived reboot of To Tell the Truth in 1991. Additionally, this was his only game show that he hosted for CBS.

In the pilot, when a contestant buzzed in, no SFX was used for the door opening.

In the 1976 pilot, the Mark Goodson-Bill Todman Productions name and announcement was never said by the late Johnny Olson.

Nine years later, the title of this show would share its name later to the equally shorter-lived mystery series of the same name starring Billy Dee Williams (as Billy Diamond) that aired on the same network in 1985. Some say that the premise of this show was similar to the shorter-lived 1968 action-adventure series It Takes a Thief. 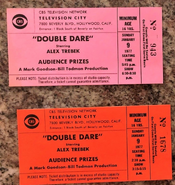 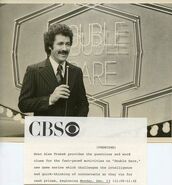 All episodes are reported to exist, and the series has been shown on GSN and Buzzr in the past.