Concentration was a game show where two contestants match prizes and solve rebus puzzles to win them. It was the first revival of the classic 50s puzzle show.

Two contestants faced a game board consisting of 30 numbered squares. Behind those numbers were matching pairs of prizes worth tens of dollars to hundreds of dollars. The hidden prizes cover up a rebus puzzle which the contestants try to solve. To start the game show and as head starts, four squares revealed prizes that were offered in that game. On a player's turn he/she picked off numbers. When the show started, the contestant chose two numbers in both games; it was later changed to having contestants picked three numbers in the first game and later both games. If the numbers he/she picked uncovered a match, he/she won the prize and revealed pieces of a puzzle. If he/she doesn't match, control of the board goes to the opponent.

Also hidden on the board were special squares that affected game play.

The first player to solve the puzzle kept all the prizes and went on to play the Double Play game for a new car.

If the puzzle was fully revealed and both players had yet to offer a correct solution, each player -- starting with the one who made the last match -- was given one guess. If neither player gave a correct answer, the game ended in a draw, nobody won any of their prizes and the Double Play bonus round was not played for that round. (Based on currently circulating episodes, it is unknown what happened if both games ended in a double-loss.)

Should time run out in the middle of the second game, the puzzle was revealed and the first player to buzz-in with the correct solution was declared the winner. The time limit was 20 seconds; if neither contestant rang in during the time, the game was considered a double-loss.

In the Double Play game, the winning contestant had 10 seconds to solve two more rebuses. The first one was worth $100 and the second was worth a new car.

Later playings starting in Fall 1977 had contestants pick off numbers from a 9-square board which hide four matching pairs of prizes (one of them being a new car). The first prize matched became the grand prize for solving the second puzzle. But there was also a "Wild Card!" square that allowed the winning contestant to play for all prizes revealed up to that point.

This version of Concentration was the first time Goodson-Todman was asked to produce a format owned by another production company (i.e. Barry & Enright) as each of their previous productions were conceived by people on their own staff.

At the time Jack Narz was hosting Now You See It for CBS while hosting this show. 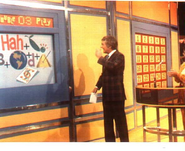 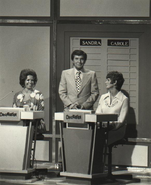 Episode guides for the following seasons can be seen at these links: