On September 30, 1975, an all-female fan club called the Disciples of James Dean meets inside a Woolworth's five-and-dime store in McCarthy, Texas, to honor the twentieth anniversary of the actor's death. The store is 62 miles away from Marfa, where Dean filmed Giant in 1955, Inside, store owner Juanita prepares for another day on the job while listening to Gospel music on the radio, and also calls for Jimmy Dean by name. Meanwhile, one of the Disciples, Sissy, comes in late after helping out at the truck stop; Juanita remarks that more members could arrive soon. Another one, Mona, is taking a late bus.

After Sissy worries about the weather ("118 degrees in the shade") a flashback to a stormy night in 1955 occurs. Coming inside for shelter, Sissy asks about three friends of hers: Mona, Sidney and Joseph Qualley (or "Joe" for short). Joe is busy stocking up some new issues of Photography magazine; Mona arrives late due to the weather. To Juanita's chagrin, Sissy, Mona and Joe go up at the counter and begin singing the doo-wop tune "Sincerely", which Juanita opposes, preferring to listen only to Gospel music.

Back in 1975, another two Disciples, Stella Mae and Edna Louise, make their way to the five-and-dime, bringing a red jacket that the club used to wear. Mona joins them and explains that the bus she was riding on broke down and had to be repaired. Looking at a group picture (with James Dean) she recalls the last time the Disciples, all dress in jackets, came together. As reunion preparations continue, so does the flashbacks. (At this point, Sissy's friend joyfully breaks the news that Elizabeth Taylor, Rock Hudson and James Dean will be visiting the McCarthy vicinity to film Giant, auditions will be carried out across that area. This only prompts Mona's desires to play alongside Dean, her idol, in that film.) When Mona reveals that Dean chose her to raise her son, Juanita thinks that she is "warped and demented" Mona loses her temper when Sissy badmouths her; the latter goes outside to "cool off".

Mona and Juanita leave the shop for a while, and see a window shopper, Joanne, driving in a Porsche sports car. Joanne has arrived in McCarthy thanks to an old highway sign promoting Dean's son at the store. The Disciples learn that she had a sex-change operation almost thirteen years ago, and (as Joe) was perceived as the only man in this group. In a flashback, Joanne was scorned by town dwellers after attending a high school dance in feminine clothing, and got brutally beaten in a graveyard. Hearing that story, Stella wonders whether Joanne is a hermaphrodite "half-man half-woman". Joanne explains she had a sex-change operation thirteen years before and is a woman. showing physical proof to several of the friends.

Later in the day. Juanita tells the Disciples to brace themselves for stormy weathers. after thinking she hears thunder. Instead, the loud noise comes from a sports car-Mona's son Jimmy Dean has stolen Joanne's car. As Joanne phones the local Highway Patrol to have Jimmy Dean returned, another flashback takes root: they hear the radio announcer reveal that a car accident has killed actor James Dean. They decide to hold a vigil.

Among the other secrets and revelations, Mona announces that she almost died from asthma. She claims she was an extra in Giant. As the reunion winds down, it appears that Joanne was the father of Mona's never-seen 19-year-old son, Jimmy Dean, who has stolen Joanne's Porsche. The Disciples make a pact to hold another one in the next twenty years. Mona refuses. She, Sissy and Joanne appear in front of the mirrors and sing "Sincerely" again. The film ends with shots of the decaying, abandoned five-and-dime store, while the song fades and the wind blows. 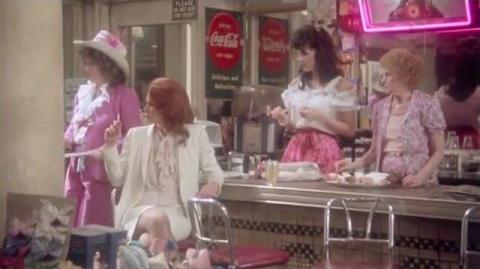