In the first round, a word was given to the viewers at home, and a video clip of a child defining that word was played. Any words that were too incriminating or the answer itself were censored.

Once the clip ended, the contestant had a chance to guess the word; a correct response earned one point. If he/she was incorrect, his/her opponent viewed a clip of another child defining the same word. If the opponent was wrong, control passed back to the first contestant, who saw one final clip (usually of a younger child, and the answer usually not that hard to guess by this point). If he/she was still wrong, Phillips announced the correct answer and no points were awarded.

The first round continued, with the players alternating control on words (originally the winner of the previous word played first on each new word), until the second commercial break.

The second round was known as the "Fast Play" round. Both contestants were given the opportunity to guess what word the child was defining by hitting a buzzer to interrupt the video clip and guess the word. If the contestant was correct, he/she received two points; if incorrect, the rest of the clip was played and the opponent was given a chance to guess.

When the school bell rang, the game was over and whoever was ahead in score was the winner. If there was a tie at the end of the game, a tie-breaking word would be played. If a contestant buzzed in with the right word, he/she won the game; as in regulation play, if he/she buzzed in with a wrong answer, the contestant was locked out, and his/her opponent got a chance to listen to the entire description of the same child, before taking a free guess.

The winner of the game won the right to play the bonus round.

This was based on the second bonus round from the original short-lived American version called "Turnabout". Similar to the main game from Pyramid, Five children who regularly appeared in the film clips were brought into the studio, and the contestant had to describe seven words to the children within the 45 second time limit. The contestant won $50 for each word that a child guessed correctly and the children won the same amount collectively. Getting all seven words won $1,000. As in the previous bonus round format, the contestant can pass a word and come back to it if time permits; however, if the contestant gave an illegal clue (such as giving away the word), he/she lost the chance at the prize. 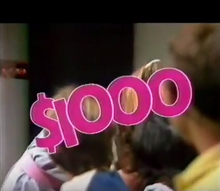