Branded was a television show about a former Calvary soldier named Jason McCord (played by Chuck Connors) who was wrongfully accused of being a coward and thereby drummed out of the service and discharged. Now he travels all around the Old West proving to people that he is not that kind of a man.

In the pilot episode entitled "The Vindicator" Jason McCord is confronted by a newspaper reporter (Claude Akins) who wanted a follow up story on the "Bitter Creek" massacre. General James Reed, McCord's mentor, was on a peace mission and was to meet with representatives of the Apache nation at Bitter Creek when his unit of 31 men were outnumbered and attacked by a group of renegade Indians known as "Dog Soldiers." As the attack was underway McCord realized that the old general had taken leave of his senses and relieved him of command, but it was too late. McCord himself was wounded in the battle and left for dead. He remained in a coma for ten days after the attack. McCord was later brought up on charges and cashiered out of the Army after being found guilty of deserting his men in battle.

The newspaper reporter meanwhile tracked down a widow of the "Bitter Creek" massacre whose husband was third in command. She possessed a series of letters her husband had written questioning the mental instability of General Reed. Those letters would have been enough to grant McCord a new trial and possibly exonerate him. But it was McCord who convinced the widow (played by June Lockhart) to burn the letters in order to save the reputation of General Reed. McCord feared that if Reed's reputation was damaged certain people in Washington DC would try to start a new war with the Apaches. Therefore McCord never spoke out about what really happened at Bitter Creek.

In the series, McCord traveled throughout the Old West, continually confronted by people who refused to believe his notorious reputation for cowardice was undeserved, requiring him to prove them wrong.

"All but one man died...There at Bitter Creek...and they say he ran away.
Branded! Marked with a coward's shame.
What do you do when you're branded, will you fight for your name?
He was innocent . . . not a charge was true . . . but the world would never know.
Branded! Scorned as the one who ran.
What do you do when you're branded, and you know you're a man?
Wherever you go for the rest of your life you must prove ... you're a man." 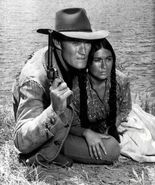