Body Language was a game show for the uninhibited.

The show pitted two teams against each other, each consisting of a contestant and a celebrity guest. The gameplay centered around the party game charades, but contestants also had to solve word puzzles to win money.

Teams played separately, with one player standing behind a podium, and the other in the acting area in front of it. Celebrities had 60 seconds to guess as many of five words/phrases/names as they could. Actors could not talk or use props, including clothing. They instead had to pantomime the words. They could pass on any words they wished and come back if time remained. Once time ran out or all five words or phrases had been guessed, the contestant was shown the puzzle. Should an actor violate any of the said rules above, the opposing contestant got first chance at the puzzle using the words said by the first player.

The puzzle was a sentence or question with seven numbered blanks. After over a month on the air & to avoid confusion, parentheses appeared around two missing words which indicated that those words were unacted. Whatever blanks were acted words the player had managed to guess were then filled in, and the player won $100 if he/she could guess what the puzzle was describing. If not, the player's opponent was called over to choose a blank to reveal and then make a guess. The two players alternated revealing blanks and making guesses until one got the correct answer and won the puzzle. If neither one had solved it after all seven blanks were filled in, the partners were each given a guess. If they fail to solve the puzzle, the puzzle is thrown out and the value of that puzzle carried over to the next puzzle.

In the second round, the roles were reversed, and each puzzle was worth $250; starting in 1985 and continuing towards the end of the run, getting all five words awarded a cash bonus of $500 (bonus prize in case of teen contestants) which does not count towards the final score.

The first team to reach $500 won the game and advanced to the bonus round. If after the fourth puzzle neither team reached $500, a playoff puzzle was played with no acting. The champion player was given the choice to start or have the challenger start. Contestants again took turns revealing a chosen blank and guessing the puzzle until one guessed correctly, won the extra $250 and the game.

The team had 60 seconds to guess as many of ten words and/or phrases as they could. Originally the winning celebrity gave the clues, but starting in the summer of '85, the winning civilian decided whether to give or to receive (most civilians decided to give). Like the main rounds, only the clue-giver could pass on a word, but could come back to it if time permitted. Unlike the main game, illegal clues disqualified that word, and Tom went over the words missed after the time was up. Each correct word was worth $100. After the first half of the bonus round, the team played one final half in which three words had to be guessed in 20 seconds or less. If successful, the contestant's winnings were multiplied tenfold, for a maximum of $10,000. If not, the contestant kept the money won in the first half. Illegal clues in the second half not only disqualified a word, but ended that half immediately.

Originally, champs played until they lose once, win five games or reach the network's winnings limit of $25,000. In September 1984, champs can stay until they win six games or lose twice. The winnings limit was later increased to $50,000 the following November.

In 1975, Milton Bradley released a board game also called Body Language with celebrity player Lucille Ball on the cover.

This is the 2nd game show where Gene Wood and Tom Kennedy worked together on. Their first was Password Plus in the early 80s.

The "disqualification" sound was the same as the "illegal clue" sound from both Password Plus and Super Password.

In the pilot, the main theme song "Working Girl March" by Dave Grusin was also used as the main theme for the unsold pilots Star Words (also in 1983) and On a Roll in 1986 and before them the Dustin Hoffman film Tootsie in 1982.

In the pilot, the win cue from the "seven chances" bonus round is borrowed from Mindreaders and later on in the 1980s pilot Puzzlers and the 1983 pilot Star Words.

For the first two shows, all contestants & celebrities wore green name tags. Starting with the third show, championship teams wore red name tags while challenging teams continued wearing green name tags. Near the end of the run, celebrities' name tags were now star-shaped. On shows in which teenagers were contestants, players wore sweatshirts of their team color (green for the challengers & red for the champions).

Body Language has been referenced, featured or spoofed in the following: 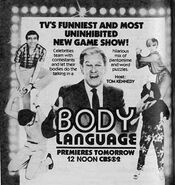 This series exists in its entirety, and has aired on GSN and Buzzr at various times in the past.