This version (called The All-New Beat The Clock) aired from September 17, 1979 to February 1, 1980 on CBS. In this format, two couples competed against each other and the Clock.

This incarnation was the only one of the four Beat the Clock editions to originate from Los Angeles (except for the Gameshow Marathon episode).

Monty Hall was named to host this version of Beat the Clock with former host Jack Narz on board as announcer and associate producer. Score Productions composed the theme song, which was performed live in the studio by a little band led by Arthur B. Rubinstein.

Two couples, one usually a returning champion, competed against each other and the clock. The champion couple (or champion-designate if the previous episode had ended with a retiring champion couple) wore red sweaters while the opposing couple wore green.

The first two rounds began with the couples competing against each other in a stunt worth $500 for the winner. One stunt usually featured the women of the couples, while the other featured the men, though the other partner sometimes had to help as well. The stunts were conducted for 60 seconds and were either races against the clock to perform an objective or competitions to outscore the opponent in the stunt before the clock ran out. In the former case, the clock was run as a fail safe, and if neither couple managed to complete the stunt, the team furthest along won.

Hall would then bring the winning couple across the stage to compete in a stunt by themselves for an additional $500. After Hall described the stunt and what both partners had to do, the clock was set and the couple had to complete the stunt in the allotted time. Doing so won the $500, but failure to do so did not.

After the first two rounds, both couples played the "Bonus Shuffle"; a round of shuffleboard on a special table which had stripes at the far end denoting $300-$1,000 in $100 increments, increasing towards the end of the table. The couple which was leading after two rounds shot first and had three pucks to shoot with, while the other couple had two. If the couples were tied going into this round, each couple had two pucks, and a coin toss determined which team shot first. The couples alternated shooting pucks, with each woman shooting first, then the men, and finally whichever member of the leading couple wanted to shoot.

The table had no walls around it, and any pucks which were thrown or knocked off the side or end of the table, as well as any which did not reach the first money stripe, did not count and were removed. The team whose puck that was furthest along the board at the end of play, and which was touching a money stripe (there was just enough space between stripes for a puck not to touch either) won that amount and got to play the bonus stunt for ten times the amount. Both couples kept their winnings from the first two rounds, but these winnings were not used in determining the champions. The couple who won the bonus shuffle would return as champions for the next episode.

If the neither team had a puck touching a money amount at the end of the game, or if the pucks were equidistant from the end of the board, the teams would play a playoff. The team with the advantage from the earlier rounds chose whether to throw first or second. Each team threw one puck. The first spot of the first puck was marked and it was removed before the second team threw. The furthest puck touching a money amount was the winner like in the regular game.

There was no money score in the first pilot as the spaces were tenfold; and only one member of the team took the shots.

The Bonus Stunt round was conducted the same way as the solo stunts were. Hall would give the objective of the Bonus Stunt to the champion couple, then the clock would be set and the couple had to complete the stunt before time ran out. If they did so, as previously mentioned, they won ten times their Bonus Shuffle score for a maximum of $10,000 and a new Bonus Stunt would be played on the next show. If a Bonus Stunt was played five consecutive times without a couple managing to complete it, the stunt would be replaced with a new one.

Couples continued to appear until they were either defeated or surpassed $25,000 in total winnings. A team could win up to $13,000 in one day if they managed to win all four stunts in the main game, score $1,000 in the Bonus Shuffle and win the Bonus Stunt.

The All-New All-Star Beat The Clock[]

On November 5, 1979, the show switched to an all-celebrity format. Changes made included:

The rest of the format remained the same.

In Pilot #1, you can hear a burping sound effect during a production slate.
The original 1979 pilot of the series aired on Buzzr as part of their "Lost and Found" week on September 10, 2015

An episode aired on January 17, 1980 was the only one where two men competed against two women. For the first two shows of that week, Charlie Brill and Mitzi McCall competed against Bobby Van and Elaine Joyce; on the third show, the women switched partners. As Brill had not won any of the six stunts he performed with the two women on the first three days, it was decided to pair him with Van on the fourth day. 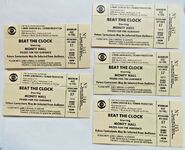 This version exists in its entirety and has aired on GSN and Buzzr in the past.