This is chronicling the 1969 version of Beat the Clock.

In early episodes, couples, now aided by a weekly celebrity guest, played for points simply by completing stunts worth 25 points each. Failure to beat the clock scored 25 points for the other couple. The first couple to reach 100 points (win four stunts) won a prize package. This was subsequently changed to the couples receiving a prize every time they won; Eventually, prizes were replaced by the winning couple facing a "cash board" with "BEAT THE CLOCK" spelled out on three levels, each letter concealing a money amount - either $25 (4), $50 (5), $100 (2), or $200. The couple would agree on a letter, select it, and the winnings would be revealed. If a couple beat the clock in half the time, they would attempt the same feat again for another $50 or as many times as time permitted for $10 or $20 each time.

At some point during the show, the celebrity would perform a "Solo Stunt" (which seemed to have supplanted the Bonus Stunt on the original show). The couples could win $50 if they guessed correctly whether the star could beat the Clock or vice versa. Towards the end of Narz's tenure as host, stunts would be replaced in the second half of the show with the celebrity playing a game of intuition with the couples, who would play for a cash prize that was divided among them.

During this time, the show was syndicated through 20th Century Fox Television. One unusual aspect of these shows was that Narz's suit jackets had a "Beat The Clock" logo sewn onto their pockets.

During the first season in Canada with the cash board, a couple picked the "L" in "CLOCK" as their first choice. Because the undersides of the letter tiles were completely blank it caused an inadvertent blooper, as the board then read "BEAT THE C_OCK" (an inadvertent profanity referring to male genitalia and Sadomasochism); thereafter, the undersides of each tile contained a duplicate of the corresponding letter to prevent such an incident from happening again.

At the time, Jack Narz made no apparent announcement prior to, or gave a reason for, his departure from the show; obviously it did not stem from conflicts with Goodson-Todman since he took the helm of their new syndicated Concentration in 1973. In a 2007 internet radio interview, Narz finally explained his reason for leaving:

Because of the show's prohibitive budget, he had to pay his own way to commute from his home in Los Angeles to Montreal. Despite buying plane tickets in Canada (which, due to lower currency value, ordinarily benefited American tourists), he still suffered significant expenses. Even a successful appeal to Mark Goodson for more money was not enough, as the costs mounted to the point of basically erasing much of his earnings from the show.

Thus, former announcer Gene Wood (who had, as a moonlighting job, been hosting a similar stunt game titled Anything You Can Do, a battle-of-the-sexes competition also recorded in Canada) came out from behind the sound booth to become host of the show for what turned out to be its final two seasons; local staff announcer Nick Holenreich (notably the announcer on CTV's The Mad Dash) assumed the voice-over duties from Wood (Holenreich had announced for a week during Narz's final season in which Wood was the celebrity guest). The show also changed syndicators to Firestone Syndication Services (which at the time also syndicated another Goodson-Todman show, To Tell the Truth - whose original network host was Bud Collyer).

Now referred to as The New Beat the Clock (although the show's logo still read simply "Beat the Clock"), the set was refreshed with a new color scheme, and the Clock got a redesign as well. As was the case with Jack Narz, Gene Wood's suit jackets also had a "Beat The Clock" logo sewn onto their pockets.

The only changes in the format were (possibly as a throwback to the Collyer era) that couples were introduced separately and played two stunts, win or lose (a win still getting a trip to the Cash Board); and both couples competed simultaneously in a final stunt, with the winning couple receiving a prize, most of those stunts had to be completed within the time limit, though sometimes, the clock was used as a fail-safe should they both run out of time. Celebrity guests were retained in the new format, once again aiding the contestants, and performing the Solo Stunt as well as "co-judge" with Wood in the final stunt of the day. Another throwback to the Collyer era (when the show was seen in the daytime) was the revival of "Ladies' Day", where women only (not counting the celebrity for that week) would play the game.

In addition, if a couple completed a stunt in less than half the time, the remaining time would be used for awarding a cash bonus - anywhere from $10 to $50 would be awarded for each time the stunt could be completed in the time remaining.

Despite continued popularity on local stations in both daytime and prime-time access timeslots, Goodson-Todman decided to discontinue production of Clock in 1974 when CTV asked the company for half of the proceeds from advertisers awarding their wares as contestant consolation prizes. Wood, returning to voice-over work, went on to a 20-year career announcing Los Angeles-based shows for G-T and occasionally other packagers; he did not host another television show ever again. 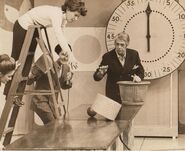 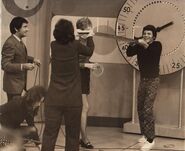 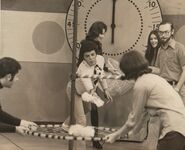 Except for the first two Seasons (the first was taped in New York City), the rest of the series exists.