All-Star Family Feud Special was a special spinoff series of Family Feud where celebrity teams (usually from popular TV shows) compete for over $15,000 for their favorite charities.

Four celebrity teams (usually from popular TV shows) compete for over $15,000 for their favorite charities.

At the beginning of each round, two members of each team come up to the main podium and play a mini-round for control of the question called "Face-Off". The host announced how many answers are on the board (which are always in order based on popularity) and then read a survey question and the first player to buzz-in gets to answer. The player to give the number one answer or have his/her answer be higher than the other player's answer won control. If neither player gave an answer on the board, the players at the main podiums get a chance to answer for control. The player that won the Face-Off has a decision to either let his/her team play the question or pass the question to their opponents.

The team that won the face-off earns control of the question. The controlling team's job to reveal the remaining answers hidden on the board with each correct answer adding points to the bank above the board. The answer's value is determined by how many people who gave it. Each player on the controlling team in turn gave an answer and if the answer he/she gave is correct, it is flipped over and revealed. Revealing all the answers on the board won the round (this is classified as a "clean sweep"). Giving a wrong answer at any time earned a strike; getting three strikes caused the team to lose control of the question, giving the opposing team a chance to steal by giving one correct answer. A successful steal won the round, but an unsuccessful steal gave the round to the first team. The winners of the round took all the points in the bank.

The first two questions had its values be worth the numbers showing. At the end of the game all the point values would be doubled.

The winning team went on to play Fast Money. The winning team chose which two players will play the game. The first team member stood at center stage while the second team member went off stage to a soundproof area. The first player has 15 seconds to answer five Family Feud questions. He/she has to give the most popular answer to each question. When he/she was done, the answers were revealed on a different board followed by the number of people who gave them. After all the answers were revealed and scored, the second player came out and took his/her turn. The second player had 20 seconds to answer the same five questions but with one exception: he/she cannot repeat any of the answers previously given by the first player or a double buzzer will sound, at which point Richard says, "Try Again." The contestant must give a different answer (the second player will also be charged for similar answers or an answer which fits into the same category as the first player's answer). When the second player was done, his/her answers were revealed and scored. If the two playing players reached 200 points or more, the team's charities wins the big money. If they can't do that, the winning team's charity still gets $5/point.

All information was meticulously and carefully taken from various newspapers on newspapers.com. Winning teams (whatever information is available) are bolded. 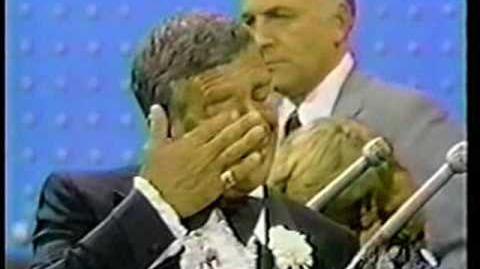 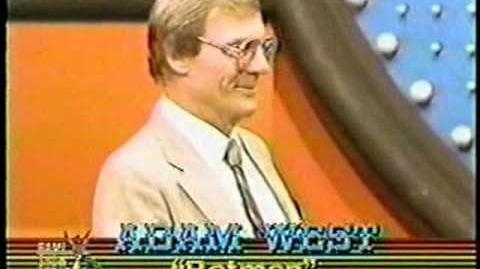